The latest from the presidential campaign front is the appearance of both Barack Obama and John McCain at Rick Warren's Saddleback Church. Apparently it was an event of such magnitude it got splashed all over the front of the Los Angeles Times: 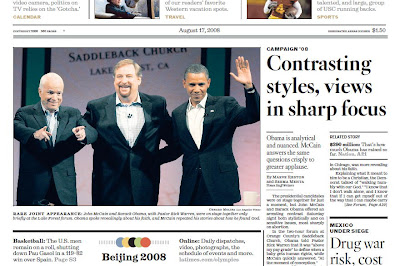 Each candidate made his case separately from the other, and I believe Rick Warren took turns asking each a number of questions. From the little that I read and heard, the candidates assumed their most pious countenance--obviously one which would appeal to evangelical and modestly conservative sensibilities--and spewed the typical vetted answers.
Is it possible that this is all perfectly reasonable behavior by perfectly well-meaning Christian folk? To listen thoughtfully to responses from those seeking the highest political office in the land? To think deeply about who will do the best job leading the country?
Isn't this really a most noble endeavor? Aren't we supposed to have a say in who has some measure of authority in critically important matters? Isn't this what we're dutifully supposed to do?
Not if you listen to what Jesus says about it.
Among many other things He said His Kingdom is not of this World. Yes, I did deliberately cap the two realms, but I did so to make the clear distinction between the two, something that most Christians in this country simply cannot do. Oh certainly Christian scholars know about the distinction and some exclusivist Christian communitarian types scurry off to their remote cabin/compounds and do crafts and a lot of Christians do mouth the standard platitudes about the distinction.
But do any truly know?
I mean know in the deep relational sense, not the informational cognitive sense.
If they did, they'd be rejecting this kind of exhibition at Saddleback with every fiber of their being. They'd be so beyond it that they'd be drawing people to the power of Christ to save, heal, deliver, and engage so the McCain-Obama contest would look like a puppy fight in a sandbox.
I've been reading some of Amy Chua's book Day of Empire, which I'd blogged on last month. It basically makes the point that the nations through history that have been most powerful are the ones most tolerant. You can get the full idea here.
While comprehensively researched and adequately written, she concludes with the typically foolish assertion made by, oh, 97% of the scholars who look into such things. She first makes the quite apt case that the United States and Rome are pretty much the same thing. Bravo, Amy, very true indeed. She then states that Rome could make those it conquered part of its empire, which, of course, it did frequently.
Then she makes her mistake. She says the U.S. can do no such thing. Of course it can't--it's a democracy.
Oh, that's why. It's because it is a democracy it cannot make foreigners its subjects. Oh, I get it. That's why.
Horse-dookie.
Democracy in America is just a way to make a whole bunch of people Caesar. Caesar's work of brutal judgment is now just carried out by millions, and some of what they do is pick out the guy they want to be the administer of prosecutorial power over their evildoing, pretty much what the Saddleback people were doing there. This is kind of why Jesus said He wasn't so crazy about people who say they belong to God Almighty also pledging allegiance to Caesar from the other side of their mouths.
The fact is World operatives working in every political, commercial, and ecclesiastical domain labor in whatever way they can to do Cain's work--manage the sin of those who ask them to do so. When you invite a McCain or an Obama into your Christian assembly in order to assess their qualifications, you are confessing that you are a sinner in need of their law enforcement service.
See, that's what it comes down to, isn't it? If Jesus did indeed die for your sins, in reality, in real actual real historical reality took out your sins with His precious shed blood, what on earth do you need with that stuff? Do you really know who those guys are? Do you really know what God wrote about not only in Genesis 4 where He set it all in motion but the entirety of Scripture where He feels it viscerally when His beloved shacks up with a prostitute?
Do you really know what's going on here?
Funny, after Chua wraps up her little thesis about the United States being way more tolerant than Rome because doggonnit we're a democracy, she then betrays her folly by speaking about how powerful the U.S. actually is throughout the world. Dollar is dominant currency, English is dominant language, all the rest of it.
She then points out, "In short, large numbers of people all over the world feel dominated by--but no connection or allegiance to--the United States."
Okay, so they don't have any particular fondness for the Agency of Cain. But if they feel dominated by the U.S, is it just possible that to a large degree they are?
And as a good wholesome evangelical megachurch loving Christian, you really think Jesus is really okay with you being a part of that?

We've been out and about since I've had some time off, and at one hotel stop I picked up a Wall Street Journal. I've never really read it before, but as I skimmed through this issue--this past Monday the 4th's, by the way--I was amazed at the breadth of material about the highest, greatest, deepest, and--as such, most repulsive value extraction there is.

Certainly a publication that goes into great detail about the goings-ons of the commercial and financial realm can't help but quite frequently elaborate on the most upscale human sacrifice practices of the day. Just wanted to briefly mention a couple of articles in the mix there, both in the "Money & Investing" section.

First there on the front was a story about how many hedge funds are taking a hit. Nothing really in it about how or why except that they simply guessed wrong about a number of things, like, for instance, the "unforeseen" jump in oil prices that hit some overseas stock markets.

Thing is, some funds that thought one way got whacked, but those that thought the other way made out like bandits (in a not-too-figurative sense). I'm not saying one thing or another about that situation.

It is just the way the World operates.

It lives by the law of Finders Keepers, and does so with billions of dollars.

What is interesting is that God allows it to happen. Short-selling is perfectly acceptable to God, who Himself commends the wealthy manager for yanking the talent from the one who buried it. Too fearful about the value God put in you? Don't think He did enough to make you His prized creation?

Sorry, but that value goes to someone else.

The other article in the WSJ, by the way, was about the SEC trying to work out how to jibe with international accounting practices. Seems everyone does value differently. The article mentions that the ensuing confusion will be a feeding ground for vultu--er-- hedge fund managers.

Want out of this body of death?

Have I mentioned that Guy in this blog before?... The Guy who is completely not of this World?... The Guy who actually buys back those who'd like that, and as such would actually know their value (and that of others too)?...

For a tinch bit more on the whole value extraction thing, go here.