A convergance of intriguing items to address materialized recently.

Today everyone gravitated from the water cooler to the office-floor plasma screen to watch Tiger Woods speak out for the first time since he was caught with his pants down a few months ago. The intrigue lies in just how attentive the country was. Woods is truly a sports idol, vitually everyone having some opinion about his exploits and their impact on... their impact on-- what exactly?

Come on, when you think about it, why should anyone give a rip about what this guy does outside of hitting a golf ball a mile? No wonder the one thing he growled the most fiercely was "Stay away from my family." No, a nation full of devout Catholicists must engage in stout moralizing and those who claim to be so progressive as to be above it all betray the fact that there is still some line they can't tolerate their idols crossing. If they still insist on impossible open-mindedness they'd be effectively marginalized and that's too frightening.

Then there was this a few days ago, another brief sports item of note: National Basketball Association commissioner David Stern declared the league will lose $400 million dollars this year. He added that a solution on the table is to slice first-round draft pick salaries dramatically.

The reason why the NBA is losing money does not lie with those particular player salaries--it is those first round picks that are the meat and potatoes of the league. No, the intrigue here lies with a game I happened to hear about on the radio driving to work this morning. It was the LeBron James- Carmelo Anthony match-up, a game that was said to be terrific. Two superstars facing off on the court, great contest -- how could the NBA be tanking?

The answer lies in the teams they are playing for. Cleveland and Denver. Two cities which along with about 25 of the 30 cities in the league perpetually evoke the biggest yawn from fans. The dilemma the league has is what would happen to league viability if they just cut the crap and put those guys on the Lakers and Celtics.

A good friend of mine told me a while ago that in England (I think it was) their soccer league is divided into strata, with a few teams at the top considered the elite, winning most of the time and just competing against one another for titles. Below that is a level of teams who would like to be at the top playing against one another, and then below them is a lower strata and so forth. I mentioned that is pretty much like it is with pro sports here in the U.S, really, they just don't let on that it is like that. My friend concurred.

Already there is talk about LeBron going to the Knicks or even the Lakers. Teams right now are making trades to maneuver to get him. Let's face it, like Tiger with golf, LeBron is pro basketball and if he were to stay with the Cavs it would be death for the NBA. But if it is let on that all 25 or so of the other teams are really just lower strata punching bags, what does that say about the "truth" of their genuine viability to contend?

So the lie is on... well, it's always been on, it's just very few care to see it for what it is. Many who think they get it like to scream and holler about it, or as one guy did yesterday fly his fuel-loaded airplane into a building containing people he didn't like very much. It just seems there are so few who actually seek to understand what's going on and then do the one thing that would truly give them peace about it all.

I can only add this last very intriguing item.

I was driving home late Monday night and saw this on the lightboard in front of a bank, you know the board I'm talking about, the one that shows the time and temperature. It was about 10:00 pm. 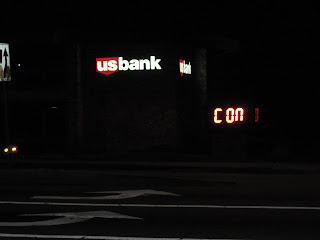 I'm not the best photographer in the world, I'm sure I could've grabbed a bit more light and detail. But it is very clear what the lightboard is saying about the bank. It simply can't be missed.

There are infinitely more important things in life than a couple of showboating sports superstars. I only write about them because I'm interested in it. I sometimes write a bit about other items of intrigue also.

But what it all comes down to is this simple fact. If you're going to live by the World and its system of provocative sin management, you're going to be lied to... and it's likely you'll be taught to be a pretty damn good liar yourself. Sometimes you can see the sewage of such items seeping up throught the grate in quite interesting ways as I did at this street corner Monday night.

If you decide to live in the Kingdom by the guidance of the One Who is Truth, you'll enjoy bountiful grace, see true beauty, and revel in inexpressible joy with Him and with others who have the capacity to authentically honor you and your wonderful gifts.

It is sad how many are conned into staying there in the World sloshing around in the sewage.

The Bountiful Wonderfulness of the Law

Our neighbors across the street have a phenomenally beautiful home. It isn't anything special in-and-of itself, but what they've put into it makes it a top candidate for being showcased in one of those best home magazines.

Turns out the busy-body lady in the house behind them called them out for having too much awning over patio areas. So the city sped over to tell them to get rid of some of it. I've seen all the awning area they have. It is marvelous. Compliments the entire look fabulously. There is plenty of sky to be seen. Every time I'm over there I seethe with the worst jealouly, this back yard is to die for. Everyone who likes nice things would think it worthy of the gods.

Not Mrs. Crabgrass behind them though.

And this thing called the law, which in this case dictates some rigmarole about exceeding acceptable awning space. Yes I know there are probably very good things about this law and certainly there are perfectly good reasons to have it.

But as God's word very clearly states, the letter of the law kills.

Why are there just so damn many murderers out there?

My wife mentioned that as this travesty is occurring, four houses down from where we live is a home that is literally a piece of shit. Now yes I did say literally, which means that when the conventional definition is considered it must mean I'm saying the house is actually fecal matter, which wouldn't make sense -- I understand. But really, who made the definition of the word "shit" anyway? Why can't it literally refer to a house that has a yard full of dry grass and bare dirt blotches, weeds overrunning the concrete everywhere, paint not just peeling but leaping off the house, old crappy looking cars parked at goofy angles in the cracked driveway...you know what these places look like. I mean come on, why shouldn't the dictionary state: "Shit. Noun. 1. A house that really looks like shit."

All this just makes me think of human sacrifice. Murderous people like this idiot lady have just got to find a way to shred the decent value of hardworking folks right off their soul. The governing authorities end up enabling it because of the strict and often draconion principles in "The Law." Meanwhile no one can do anything to the shit dwellers down the street because what're you going to do? The reason their place is shit because they're worthless anyway. "Make this house better or... or..."

The answer to the murderous nosy lady and the worthless shithouse keepers, both of them, is Jesus Christ.

It is by His truth and grace that people can see the beauty of what our across-the-street neighbors are doing and rejoice in it, and also the worthlessness of people like our down-the-street neighbors can be wiped out -- really, I'm no less worthless without Him, I'm no one special. By His grace I also know that I don't know everything there is to know about either of their situations one way or the other.

But that's only because of Christ loving me, loving the busy-body lady, loving the lazy homeowners/renters/whoever as much as He does.

I'm waiting for the current economic debt bomb to explode in people's faces, only so that by it people can really see the pointlessness of the law to stop sinful behavior. Every time I read a finance expert's shrill cry for more and more regulation of reprehensible behavior by political and financial institutions, I think about when the tipping point will happen -- that point when people understand that this whole sin and law and worthlessness thing is for the birds, and that only Christ and His work shedding His own blood can truly end the horror of human sacrifice.

This thing with our neighbors is just a microcosm of all that.

Watch out. The fireworks are only just beginning.