A Visit to Costco

Tonight we made a trip to Costco, snagged a few things we like you can get in bulk. We also picked up some videos we had made into DVDs.

Some things I got to behold in the books and toys section.

"Frozen" stuff seems to be everywhere, "Frozen" being that extraordinarily popular Disney/Pixar film about the gal who has power to make things very cold. Of course, the character Elsa is the one who decides to "let it go" in song, abandoning all pretense of decorum and ice-blasting everything around her. I've heard children sing this song to death, and it makes me very sad.

Mark Levin is a popular conservative talk show screecher, and please, don't get me wrong, I like listening to some of his schtick, it is often smart and insightful. But Levin is still a small fragile toy in the hands of the Operative elite who twist his screws.

His latest book is Plunder and Deceit, and while I only slightly leafed through it, I get the idea of what it is about. I've read parts of his other books and I hear him talk about it on the radio. The thrust of this work besides all the "The Great Splendid America is being flushed down the crapper by the liberal jerks" stuff is that the nation's children are most in danger and we must re-educate them.

Re-educate them about what? Sure we can tell them about character and discipline and responsibility, that's great, but who is going to do that, and why? Yes Levin is supportive of the family and traditional-minded institutions, that's fine. Yes he does see the core modus operandi of Caesar's often ruthlessly autocratic administration.

But he will never get the why.

Unless of course he comes to Christ in repentance and rest, and I'm not sure he's going to do that.

For you see, he's just a part of getting people riled up to "let it go" with their rage and fury against the oppressive socialist hegemony that he sees as taking over. Children will only grow up to be a more vibrantly violent part of the culture war Levin enthusiastically fights. 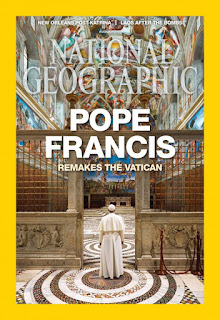 How about these two publications in the general vicinity, there at the Costco wholesale superstore?The latest National Geographic features a cover story about Pope Francis at the entry of the Sistine Chapel. A very powerful image indeed. The other is a DK book all about Francis, "The People's Pope." He looks so regal and smart and thoughtful and splendidly wonderful in every single photograph on every single page of every one of these tomes.

What if I mention Rome is at the forefront of provoking the evils that Levin rails against, that it is instrumental in making the millions of young impressionable Elsa's of the world scream from the depths of their psyche's to let go all the hatred and revulsion pent up by the downtrodden against the those carrying out the charge given to Cain by God since the beginning of mankind's history?

God did set all this in motion.

All the culture war stuff, all the turgid law-making and -keeping and -abiding and -twisting and -enforcing and -adjudicating and -interpreting and -breaking and -worshiping was set in motion by God, through Cain, on into Babylon and Persia and Greece and Rome and Britain and now the Great Wonderful America to crack heads of evildoers for one striking purpose.

For people to see it for the ugliness that it is.

And to hear the horrific destruction those beholden to it brings.

And to understand one cannot find true freedom and rich salvation from any of it.

And to discover over there, far away but close enough to touch, through the narrow gate -- Truth and Grace.

So they'd be healed.

I can't deny that I feel tremendous sorrow when I see crusaders for homosexualism adopting Frozen's "Let It Go" as their anthem of justification for their behavior. I can't deny that I weep even more for the children who follow all this crap straight to their eternal doom because there aren't enough people who will call Rome what it is and be Christ to those who do see, hear, and understand and do want out.

You know, there was a time when courageous evangelically-minded people articulated most boldly and clearly the truth about Rome. Today people who incisively detail it as it really is are treated as the worst bigots and racists and Neanderthals and all that. 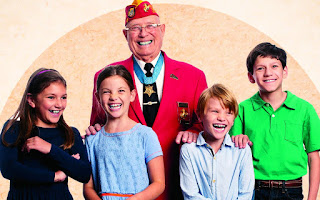 This was the photograph that was on the cover of my Sunday newspaper's insert magazine. It shook me to the core. This old man may be a very nice, highly decorated veteran or something like that. But the Congressional Medal of Honor he's wearing has imagery that is wholly occultic in nature. The most common ones feature the image of the Roman Goddess Minerva, whose task it is to ensure children are taught how to use the arts and commercial activity to wage war.

Where are the parents in this photograph?

I know Parade magazine is a wholly Catholicist endeavor, gently shoving the World's humanist ideals into the souls of those who simply cannot protect themselves from it -- but again, that's how it should be. It keeps liars and murderers from destroying everything around them enough to protect the elect and make avenues for those who want to get out of it and come to the Kingdom. 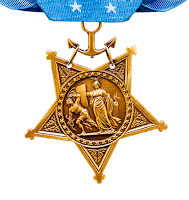 That guy in the photograph is the essence of warrior. Warriors are not bad, the question is, what is the war for, what is it about, and yet again, why? Minerva in that medal is pictured using Sun-Tzuan arts of war (the symbol of Roman might, the fasces, is right there next to her in the engraving) to fend off "Discord". Sounds so wholesome and virtuous -- no conflict or disagreement, let's just all get along, let's settle into the mainstream, be tolerant and polite and helpful, don't be extreme about anything.

This is not the gospel. Jesus said His message of righteousness and salvation by Him alone would turn many against Him, and those who believed on Him would be hated by those who hate Him and His, ahem, extremist views.

Those children though. It is indeed harrowing when I start to grasp the reality of what Jesus told us about two millennia ago, that children would turn against their own parents. I never could really believe that -- children rebelling against their parents in the most heinous ways. Jesus was very explicit, but, nah, that couldn't happen.

Tonight for a bit I watched some of one of those videos-turned-to-DVDs we have of our 12-year-old daughter when she was six months old. What joy. Truly rapturous joy.

What awaits her in her future.

I pray like crazy that Christ would wrap His body around her heart to protect it from the onslaught of evil that continues to build -- looking at all that stuff at Costco, it seems so nice and sweet and harmless -- and I pray like crazy that she would grow up to be the most powerful Kingdom-bringer there could ever be. Because, yeah, I weep for others' children too. I really do.

I pray like crazy that I may be the most loving, caring, treasuring father, but yeah -- also the most rabidly courageously blisteringly truth-telling father that I can be.

I pray like crazy crazy that as a bright young woman she'd be on the cutting edge of sharing truth with so many so they'd see, hear, understand, and revel in the Kingdom just like we get to do...
__