Imagine People Who Can See and Hear

Tonight I turned on the national news to see if they were going to continue to run around out there with this story from the University of Missouri. Today I caught a piece from City Journal and the author's first words were "The pathological narcissism of American college students has found a potentially devastating new source of power..." These fools have proficiently employed their inviolate victimized class status to shake up the institutions established to sustain order and promote reason in a democratic society.

They are fools because they've been convinced that their crusade must forge ahead irrespective of the piddle nature of their cry. Really, even among the African-Americans they claim to champion, for the life of me I cannot see how they can even remotely equate someone calling them a n***** with what 19th century slaves had to endure. It's embarrassing.

But the key is in who's influencing them to do all this. Fomenting racialist sentiments are stirred by the deepest politics operatives they would never suspect are yanking their strings.

In fact, the Mizzou incident wasn't even the first story on the evening newscast tonight. That one was about a bank hacking job carried out over the past few years by guys not wanting the personal information of millions in order to buy stuff, but to get contact information to send persuasive emails and other such contacts to get them to do things with stock, allowing the hackers to adjust their investments to score big dollars from that manipulation.

It's all about the information.

Scripture says if you don't listen to Jesus you're going to listen to a spectacular counterfeit. There is Jesus, the Living Word, and there is "Jesus", an anti-Christ who wants to have you for dinner. Jesus' words give life, the words from that other "Jesus" will kill you, for they come from the father of lies and the first murderer.

Thing is, from whom do those words come from? Sure we battle against powers and principalities, but who is it who does their work, here, in our temporal world?

Check this out. I was blown away by what I read here. And I'm sure this isn't the only sincere, transparent confession of what really goes on in the institutions that drive the pathetic cowardice of the University of Missouri's out there. It is perfectly within the designs of the Society, and it will get worse, and worse, and worse.

I can only see one thing from this. That people who do understand and know Christ will be there for those who see the Hell those powers and principalities want to make on earth -- and want out.

And want Him, and want the Kingdom.

I know why all this is happening. I do, and I weep. Most churches are pitifully weak spittle puddles who don't have the power of God coursing through them like they think they do because they are sold out to Cain. Everyone who desperately wants life and mercy and freedom and vibrant whole restoration look at those places, and they run a million miles away.

Go ahead. I challenge you to let God open your eyes, and your ears, and read that article from that young bright Catholic theology student, and get what she's saying.

Then get into Scripture and find the One Who Loves. And Frees. And Makes It So You'll Live.

There seems to be a new report out by the Pew think tank people that says people are getting less religious these days, especially young people. 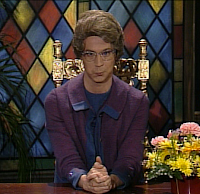 Yeah, I can see that. I see lots of people who couldn't care less about God, church, rituals, stiff rules and stuffy morals. A while ago the Barna people put together a list of things people hated about church and its people: they're too judgmental, they're too homophobic, they're too political -- ad nauseum. Yeah, who wants to spend a millisecond with the church lady Dana Carvey made famous on Saturday Night Live?

Problem with all that is a very simple one.

You can't not be a devoutly religious person.

"What? Not even. I'm an enlightened person. I'm someone who believes in science. I'm someone who isn't superstitious or any of that, and for sure I'm not judgmental or extreme with any of those moralistic intolerant positions so many religious people have."

I'd say there are about a billion people who feel this deep in their souls.

They do so very religiously.

"But wait! Didn't you listen? I have nothing to do with any of that church stuff! How can you call me religious?"

It is precisely because the "non"-religious are so for very religious reasons. Take your typical atheist. He'll insist there is no God -- for whatever reason. Thing is, for him to say there isn't a God is to know quite a bit about God, namely that there isn't one! I mean, how could he be so sure? The only way he could is if he can see everything in existence, and to do that, he'd have to be God!

This is one of the most reliable age-old arguments against atheism, and this isn't so much to point out that atheists faced with this unsettling logic always get nervous, but to emphasize that no matter how much they object, they are just as religious as anyone else.

Why, then, do places like the Pew Center say religion is waning?

It is because they've been convinced by the Company assigned the job to pound humanism into the soul of World inhabitants that "religion" means a church building and rituals related to some divine being and typical characteristics like moral arrogance and political conservatism.

There is so much to this, I always chomp at the bit to take on the idiocy spewed by the World. Can't now because I'm exhausted. Wish I had the time. I'm only bringing this up here to introduce my latest home page piece. Hope you enjoy it.