There is serious talk these days of forming a Bad Bank of the United States. Yes, you heard me right, a "bad" bank. Because bank's are being pulled under the water by the rip currents of the toxic assets they were "asked" to assume, the suggestion on the broiler is to create a federally authorized institution to assume them and manage them in the best way it can, freeing financial institutions like Bank of America which has been dragging in an almost lethal way since acquiring Countrywide and Merrill Lynch.

A "bad bank" is not such a bad idea, really, for there is an equivalent of one in the real world. It is quite elaborate, actually, having different levels. The first is the 99 cent store, outlet shops, discount centers. The second is the swap meet, flea market. The third is the yard, garage, or rummage sale. The fourth is the thrift store or downtown mission. There is even a fifth level, it is called the dump.

Those things are perfectly fine operations, for they make veritable the value assignments of all sorts of things. Almost everything, really. Why can't there be one for finanical assets?

The tricky part comes in when people want to keep lying to themselves and ask government to enable the lying, something it does very well. It seems all you hear these days is the answer to the falling economy is to rethink how we do business.

I can rethink that for you right now.

The World has all kinds of spiffy ways to try to do that, including the bold proposal of having a bank just for toxic people.

How about considering the Kingdom approach? The only thing about that is it is waaay far away from the World and any of its banks.

Want to know who the Kingdom's Banker is? Some thoughts about Him are here.

On the eve of Barack Obama's inauguration, I wanted make a blog entry here mostly to direct you to my good friend Ben Bush's excellent post from a few months ago. Most would never know that there are some rather legitimate challenges to Obama's constitutional qualifications to be U.S. president, but I am certain they will be quite fruitless. Certain authorized powers that fewer can identify have already coronated Mr. Obama, and as you can see from Ben's insightfully veritable words that all forms of clever causistry and provocative sophistry will be employed to buttress his reign. 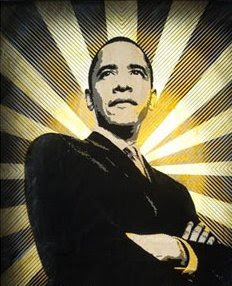 It doesn't much matter. It is all show. Obama is really just a Hollywood creation, following the dictates of those powers. What those powers do is quite significant, for their job is nothing other than managing the sinful conduct of those who ask them to do that. Obama is just a boffo character everyone can look at, an archetypal superhero fiction upon whom they may put their trust. His purpose is to fill their imagination with some assurance that they are not as wholly wicked as they know they are.

It is interesting that the most pressing thing Obama is expected to do is rescue everyone from the collapsing economy. Obama has desperately pleaded to get his hands on the infamous $700 billion before he's even taken the oath, and he will ask an eagerly conciliatory Congress to get him over $800 billion more. All of the money spent so far has already been used exclusively to buy stock in the nation's major banks, which represents each bank's asset portfolio, which itself represents the vast totality of loans they made to people, who themselves are...

Well, no wonder they will all slobber all over the new president tomorrow. All those assets that the federal government, the Federal Reserve, and foreign central banks are buying up by the gobs-- tragic that the term for them is always "toxic." Have you noticed that?

"They are forced to buy those toxic assets." What is an "asset" except an assessment of something that people value? And what is that except who a person is in and of themselves?

This begs the question. Why precisely are so many of them so "toxic"?

Could it possibly be that people are liars--that they simply say they can do things when they can't, or worse won't do them when they can or say they will? Could it be that they live such fearful lives that they feel they must endure lives of grand deceit? Hey, don't look at me, I'm not the one calling them toxic! Furthermore it seems to me most actually see this fact about our woeful human condition!

Thank goodness there is Barack Obama to save the day!

Well, I just don't think anything will change. Cynical me. It seems to me that dumping money into the laps of toxic people makes it less likely they will turn around and start working like they should to make other people's lives better.

There is only one Person who can do that, because His simple request is that we do that which we do well for other's well-being from one motivation, and it is not fear.

And no, that Person is not Barack Obama, though you know that Person thinks it is perfectly fine for Obama to do what he will do so well. Sinners need someone to enslave them. Maybe even for a long time, but for Christ, maybe that's just enough time for them to leave that World

And come to Him instead.

Where'd the Attorney General Get That Idea?

Last month I blogged on a Los Angeles Times front page that featured the lead story: the Attorney General of California, Jerry Brown, arguing that Proposition 8-- officially declaring marriage between a man and woman-- should not be put into the Constitution. His case was basically that same-sex couples have a right to do anything and everything that opposite-sex couples may do.

I'd written something regarding this situation that I am correcting here in this blog post. I'd asked the question, something like, "From where does Brown and those who support his cause get their ideas?" Here is where I made my mistake. I said "From nowhere," implying that endorsing, supporting, condoning, or favoring homosexual behavior was some figment of their imaginations.

I could not be more incorrect.

Indeed, the truth is

They get their ideas from somewhere.

As a reforming Catholicist myself I still find myself caught in the trap of saying things like "That's irrational" when nothing is truly irrational, for everyone does indeed do everything they do for some reason, even if it is a thoroughly unrighteous one.

In this case I realized I was saying "That's just some crazy idea from nowhere." But the truth is everything people think comes from somewhere, or even better

Even if I said "The caramel-spoken emu planet was stitching a neo-Nixonian cappaccino amour," a set of words I imagine no one ever assembled before ever in all of history, the concepts and formation of words in this non-sensical statement were derived from something before. If anything it is the antithesis of anything that has meaning and the concept of that is a learned one.

The key idea: Someone has taught everyone whatever it is they have to think do and say.

Jerry Brown and all who are great with homosexual-oriented conduct have been taught that particular sentiment from someone, somewhere, somehow. Could be a lot of people somewhere somehow, could have been disseminated through the ages in someway.

Don't ask me to trace that process. I confess I just don't know enough of it all. I'd venture to say that those who believe all should embrace sodomy even under the weight of the law are proud to carry the torch of those who'd come before them, whoever they may be.

Ultimately, however, we really get our ideas from one of two sources. We get them from God or from those sent out away from the presence of God. The origin of what we think, do, and say is one of these two. Many will claim to carry the torch of the former, few the latter. This does not mean that the "God people" are not actually those sent out away from His presence.

From whom do you get what makes up you?

Any Value Enhancement Going to Happen in the New Year?

Much of the new year forecasting has to do with whether or not the economy will rebound from an unsightly tanking in '08. World prevaricators--oh, wait, that's not the right word--prognosticators, sorry--World prognosticators will blab about this or that happening--maybe, if this or that also happens and then if...

The simple fact is that as long as people are habitually out to hack off value from others to allay their fears about whatever, then the economy will either be awful or what looks like the economy will fool them. Indeed I didn't exactly use prevaricator there by accident, for the word is just a fancy way to say liar.

Addressing the massive Bernard Madoff rip-off, Los Angeles Times business writer David Lazarus refered to a scene in the film Hannah and Her Sisters. A character played by Max von Sydow had been bewildered by those who wonder how something like the Holocaust can happen. He says, “‘How can it possibly happen?’ is the wrong question. Given what people are, the question is, ‘Why doesn’t it happen more often?”

The fact is, it does happen, all the time, regularly, and not just by the high profile big shots like Madoff. Today's holocaust exists in the thousands of investment schemes humming along, profiting handsomely from rife value extraction. People are incessantly told they are not victims, and if they find out they are, they are then told to just go to their Jesus.

That so many are contracted with the World of Straw-Man Jesuses tells me that human sacrifice will continue doing brisk business, and the whirlwind of fear and more fear will continue being a vibrant part of the drama.

For a bit more on this, I've written my latest home page piece about it. It is here.