What To Do With the Stupid Ideas of the Cancel Culture 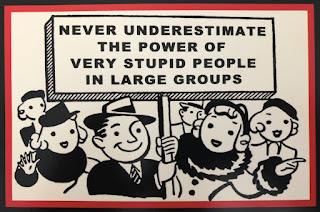 I can't neglect to put in a follow-up post to my last one from just yesterday about how many hifalutin public figures put out a whiny letter in a major magazine issue telling us all that bad ideas need to be talked down, and how pointless that strategy is in confronting certain ideas.

A very good friend shared with me the video below and it is one of the funniest things I've seen in a long time. What makes it so wonderful is that every single one of the ideas he ridicules is not just a bad idea, but a stupid idea. Some of them are just flat-out monumentally stupid. (Oops, probably shouldn't have used the word "monumentally" there because that may trigger someone who dislikes monuments that may have been erected with some racist motivations...)


So yeah, what do we do with stupid ideas? Yes, it might actually be quite justified to allow them to float about only so we may all heap the requisite amount of ribald mockery upon them. Really, makes life worthwhile, it really does. No need to shoot them down, most know they're stupid and therefore quite enjoyable for fine entertainment. That's cool. (In fact I'd heard people in the Bronx have a fine sense of humor, which explains why they keep voting for Alexandria Ocasio-Cortez. Good for them!)

The problem is when the stupid ideas morph into dangerously stupid ideas and become the entrenched rationalizations for witch hunts.

A great example of the stupid idea is the elevated craze of changing sports team names. This crusade has been going for a while, but it has now revved up in a big way. To be honest, I'm not crazy about the team name "Redskins," indeed for the reasons the left shares. But for one, it seems I remember they had the name originally to honor American Indians. And for two, this is a sports thing. It really just isn't that big a deal in the grand scheme of things. Half the country doesn't even know the NFL exists, and more are actually ditching it with all of the NFL people's renewed bleating stupid identity politics things. This is not even to mention there are indeed, I agree, a lot worse names than "Redskins." That's fine, we can agree on that. But where does it all stop? Anyone can find something offensive about anything in a sports team name.

But this is something that makes the stupidity even more metastasized. All these people jettisoning the names and figures to appease the Bad-Idea Pathodicies are such public figures, and the worst elements of social media is now out of control with its now practically institutionalized cyberbullying, that these people, the D***e Ch***s whatever they want to be called and the NFL players kneeling or not kneeling during the national anthem and even the uber-corporation that makes Uncle Ben's rice for crying out loud... they like their income streams.

So if the stupid-idea mob demands obedience, then so be it.

For now we can have a great laugh at their expense, but when does it get to the point where you will be prosecuted for saying something completely fine, completely innocuous, and you lose your job for it? Right now you may not go to jail, but because you are in some capacity in which The New York Times can put up a photograph of you with most unattractive look and the caption, "[Your name] did a very very racist thing here," to be seen everywhere even by those who don't even know of the Times -- well, you're cancelled.

Really, this is not only the latest type of brazen discrimination, but it is a modern-day form of human sacrifice, something World Ops are experts at facilitating. Thing is, they're supposed to. It is their job.

There is the Kingdom, however. It is good there are a few who dwell there and may fellowship together in this environment. It is good to know that amongst all the stupidity we can laugh a bit, we can make the case graciously and articulately against the truly bad ideas a bit more, and we can minister to hurting people with Christ's love a lot.
__
codependency conspiracy culture war deception education folly Hollywood human sacrifice Kingdom media racialism scholarship understanding wisdom