Stupidity IS Painful, That's Just the Reality. It's Also the Reality that So Many Through the Ages Have Refused to See It. 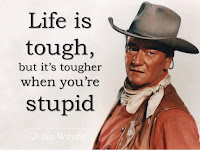 This isn't new, this stupidity. It's been happening through the ages. And it always kills people.

One of my favorite movies is Men in Black, and in one scene Agent K explains to Agent J the way things are. He said "A person is smart. People are dumb, panicky, dangerous animals."

Astounding wisdom in one, simple quote.

Interesting how God wrote a whole book to tell us this. Agent K said it in a sentence. God loves us so much he told us over and over again so maybe we'd get it. Go ahead, read the Bible, I urge you to. You'll find that most of it is how dumb, panicky, and dangerous each of us is when we allow ourselves to get caught up in the herd.

Right now with this coronavirus hysteria that herd is stampeding. Heaven forbid the stampede gets catastrophic. I'm not betting against it.

I'm not because the coronavirus is relatively nothing. Oh yes we see all kinds of posts from people who think they're scientists but they're just parroting the party line. "Lions and tigers and coronavirus oh my!" They only get hysterical when they see a maskless individual within three feet of an elderly person because The New York Times told them to. They seem to be livid because of what they've been told about Italy and that half the people in that country are going to die because triage personnel must make life-or-death decisions.

First of all the worldwide numbers are minuscule. In fact "minuscule" is the wrong word, because that implies even anything substantial. "Nanoscopic" may be better. And straight away, does me saying this mean I hate old people? Whut? Stop letting The New York Times tell you how to moralize with the right measure of rage, please.

Those who have died in Italy are mostly those who have certain demographic characteristics that have made them much more likely to die from this. One such is heavy smokers. Are you a heavy smoker? Seems to me you've already made your bed with your own mortality. So what's the issue?

The issue for the rest of us is not as much that authorities failed to take precautions a long time ago related to those high risk groups, but that the mass news media obsesses about this stuff because it sells copy, and it does the work of tons of virtue-signaling. "Look at how great we are telling everyone about this disastrous pandemic, look-look-lookit us!" (Also note how often they use the word "pandemic" in their news reports. It isn't, by far. They say it because it just adds to the drama. Again, numbers people, reality people...)

What helps people to not be stupid anymore is, first, Christ, so yeah, might be good to start talking with Him a bit if you haven't already, and second, yes...

The coronavirus hysteria is just the latest vehicle for World Operatives to continue to ram socialist public policy into the mainstream. Yeah I still see quite a few people railing against socialism, but please, the second we started Social Security in 1935 we were socialist. Come on. Now it is just getting more dicey.

Look at this, even Donald Trump has hopped on the Andrew Yang bandwagon seeking to hand $1,000 to every American. There're just not enough voices out there wisely drowning out this tremendous stupidity. Excuse me, but where did the $1,000 come from? $1,000 is only green rectangular pieces of paper unless there is some productive value behind it. An individual may wave about his/her $1,000 shouting gleefully with deepest gratitude to the reigning socialists all the way to empty grocery store shelves.

It's like the laws of physics, these laws of economics. Jump off a building and the law of gravity takes effect. Hand people money for doing nothing and the law of disincentives takes place. In both instances people die falling very very hard. That classic quote from the Soviet laborer comes to mind. "They pretend to pay us and we pretend to work."

Here's another great socialist idea: Schools are not only closing for far too excessively long periods of time, but they are telling teachers that they may not award any credit to any work they assign online. Whut? This complete removal of the incentive to work on academics will not make these young people's future productive capacity any better. Oh I do understand why they do this. Hifalutin educrats feel that if some student somewhere does not have access to the learning material, it is imperative all the students are not forced to try to achieve great things academically.

This is socialism at its best.

But hey, don't get me wrong.

This is what Cain's legacy does. This is the reigning prince of the power of this world's modus operandi. It's all good.

Socialism is actually great way for an autocrat to sound really good telling everyone how things will be in an economy. In fact Trump just this morning kicked into gear the "Defense Production Act," something that has actually been employed 50 times since first enacted in 1950. Yeah, more government management of the means of production -- Marx is popping the champagne in his grave as we speak. Truman was shredded by the Supreme Court for making a similar executive decision, and that was during a war! Guess now with Congress' authorization it must be perfectly fine.

Doesn't mean it isn't human sacrifice on a larger scale going far beyond whatever happens now with coronavirus. Doesn't mean people won't die -- the coronavirus death toll pales in comparison to the ruthless tools of authoritarian socialist policy, even with all the "democracy" window-dressing.

Once it again it is the reality of the ordained human sacrificers who've built a city to make it happen much more smoothly. No matter how much you may screech against socialism, it is supposed to be this way. It always has. People who are dumb, panicky, and dangerous simply refuse to see it.

If you want to see it, please! I urge you to look through the fourth chapter of the book of Genesis -- there you will find a great explanation of how all of this started. But please, don't stop there. Pay very close attention to the very last part of the very last verse in that chapter, then slip over to the fifth chapter of the letter to the Romans.

There you will find The Deliverance From All Of This.
__

I should add that after posting this, I was listening on a mainstream radio show to Dr. Kelly Victory -- I'd never heard of her but she seems to be some kind of a voice in media -- and she said that the experts are using "predictive models" rather than looking at the real clinical evidence. Precisely. Is it possible, huh -- is it at all possible we could just get enough not dumb panicky dangerous people making decisions out there?... Seems to me God was a little ticked at false prophets a few times in biblical history.

Here's another great article I just found, hat tip to Kimberley Strassel. Brings up another item related to the hysteria-driven socialism augmentation: When this whole thing dissipates, how much will the autocrats take credit for it with the much further entrenched socialism that resulted? Again, it is how it should be for the World devotee.

Might want to consider being a Kingdom dweller. Just a thought...
___