Cain's Proficiently Functioning Legacy Is All Over This 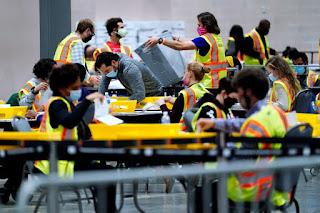 The most ferociously truthful people on the planet right now are Sidney Powell and Lin Wood. They know, based on the plain evidence, that powerful deep politics operatives manipulated election procedures and protocols to ensure the retrogressive movement gets more of a foothold in our world. Not to worry, this has happened hundreds of times before through the millennia, and if you decide you want to be in the full abiding care of The Shepherd you should have no care at all.

It is good to be at least a bit aware of the horror He delivers the soul from. My latest home page piece gets a bit more into this, I invite you to take a look. I appreciate you readership.

But Powell and Wood seem to be the only ones with the cajones to actually fight for truthful political things. They know Trump won reelection by millions of votes. They've now urged a boycott of the senatorial run-off elections in Georgia January 5th because they know that Georgia's election processing is such a mess that it really doesn't matter what Georgians do when trying to stem the tide of Democratic party fascism by voting in two senators to keep the US Senate in Republican hands, it won't mean anything. They will still lose because of the sanctified improprieties that simply must be in place to ensure Trumpism is defeated once and for all.

They are being roundly criticized by the Always-Trumpers and anyone who believes it will make a difference. Sad.

This is the way Cain's legacy works.

We just recently found out that Walter Williams passed away. If you don't know Walter Williams, you should. He was a wise, thoughtful, economics professor genius. His last piece of punditry closed with one sentence that spoke to the whole "Kindness is everything" propaganda. He was writing about how lenient public schools had become towards patently criminal behavior, and he wrote this:

It is biblical. The Law is good. Hell is a very good place for lawbreakers. Without those two things we would not know the breadth of our own evildoing, so we'd better get with The Shepherd Who Delivers Us From Ourselves. Otherwise...

I happened to catch this small video clip posted by a friend on Parler of Williams speaking volumes about Cain's designs. Convince people the government has tons of money and kindness and they will make him their beloved keeper. Williams speaks so much truth to that. I am not in any way here dismissing the tremendous value of Cain's activity, it is authoritatively legitimate. Williams is just elucidating the truth about it.

It is still human sacrifice dressed up nice and tidy.

It is what people fully devoted to elevating the System mandarins as gods believe, how they feel, and how they behave.

There is the Kingdom...

The photo is from Matt Slocum at AP. Thank you.

(Postscript: Just as I posted this I caught this news expose about Lin Wood's true affections. "Oh WOW! No wonder he wants Republicans to stay home January fifth! HE'S A CLOSET DEMOCRAT! Aaaghh!" Still, everything about Cain's legacy applies. In fact it makes it more pronounced. Powell and Wood are just as much manipulators as they are the manipulated in the service of Cain's dutifully discharged machinations. It cannot be emphasized enough. You're part of The Conflagration, or you are in The Shepherd's hands.)