On my long walk the other day I was ruminating on the contemptibly massive dissipation of the pretty decent things we've enjoyed for some time in this United States. Many are a bit upset about how this recent presidential election was stolen from Donald Trump, and it definitely was.

It is far more disturbing to realize how few understand it should be way more soul-crushing to observe that there are in this United States so many people who are willing to cast an official registration of their desires (by their vote in a civil election) for more proliferated sexual assault crimes (any promotion and enabling of LGBT+ activity), more destruction of people's legitimately earned income and wealth (gruesomely distended public assistance programs and abusive monetary policy mandates), more of the explosively ugly bearing false witness (rampant accusations of some absurd identity politics violation obliterating lives and livelihoods), and the latest, more pounding down the stultifyingly oppressive fear for the purpose of amplifying tyrannical behavior in the name of "kindness" (all the completely unnecessary Covid lockdown constraints).

It is looking more and more as if Joe Biden will be president simply because the New York Times said he was, but he will not be making any decisions about anything. I was thinking he may indeed be removed by impeachment (when his lurid financial involvement with China is further exposed) or the 25th amendment protocols (when the cameras catch him saying something reflective of such cognitive impairment that the New York Times convinces enough people this would keep him from doing his job), but I'm not so sure. The Times can spin things in such impressive ways that he may last as long as that dude did throughout that goofy film Weekend at Bernie's, you know, where those two young men had to get everyone to believe he was actually alive to get what they wanted?

So many of these people now more empowered to further implement those things listed above.

Some will call it "The Great Reset." Fair enough. It's been known by many names through history. I wrote a bit about it in my latest home page. In fact I can't neglect to add this story about the Vatican linking up with all those uber-power-brokers to make for a more "inclusive" society. Sounds so wholesome! No authoritarian enticements involved whatsoever! Hell couldn't have produced a better arrangement of goodness and kindness and goodness for everyone all around!

Note that the culprits cited are really not the ones doing the most in this noble endeavor. The real ministers of this fabulous new utopia work for Rome. Please, think about it. Who is sharing those ideas with all the plutocrats and technocrats and bureaucrats and voters hypnotized by them? Where are those ideas coming from? If you ever read the widely distributed publication America, you'll see the agenda unabashedly printed on every page from front to back.

You could do worse than to look at one single verse in the Bible to discover more about who they are and what they're about. I'll tell you what that verse is right now, right here.

That one, right there. One thing about it is it does mention "in which you used to live." Paul is speaking to people dwelling in the Kingdom who were once before immersed in all the System stuff, all the civil election voting and paying excessive tributes and so forth. He's emphasizing while all that is necessary and required to heavily regulate a reprobate people, it is far better to be a Kingdom bringer, sowing into the lives of everyone around the bountiful gifts God has graciously and freely given us out of His love.

As fine apologist Greg Koukl veritably says, "never read a Bible verse." So please, read the entire chapter -- and the ones before and after. You'll note this one verse is smack in the middle of great assurances that Christ's mercy and provision cover the one who seeks Him and understands Him and loves Him and wants Him to be his/her Shepherd and so enjoys all the things He's given him/her in the Kingdom -- all that. But also note that a few verses before this one, He also assures us that He's got this. Dwell on the truth that all the megalomaniacal people out there are under His foot. Look, see those other verses, verses 21 and 22 there in the first chapter of Ephesians.

So back to my walk. As I thought about how much God's got this, how much He just revels in our fellowship and prayer and praise no matter what insanity there is out there, He's got this. It doesn't mean I can't feel about it, in fact some of why I'm posting now is I wanted to share this terrific piece from my new fave webzine Off-Guardian. It is a splendidly visceral articulation of how much this stuff means to us, how much we want to connect with people who also see things the way they are and not how the mandarins lie to us about the way they want us to think. I hope this writer discovers Who he may turn to in light of the things he's talking about, the very things that can indeed crush the soul of so many who do hunger for righteousness.

As it is many people today are engaging in what I see are "Jericho walks," gathering in front of the nearest government buildings to protest the obvious election theft and the obsequious court dismissals of that theft. To be honest I hope they succeed. I hope they can make the statement. These people are inspirational, they are. 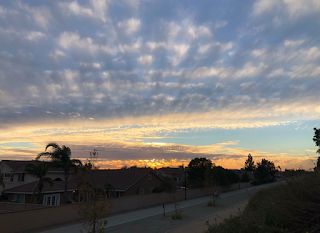 But if they don't understand what the Kingdom is truly like and the reality of its stark distinction with the World System superintended by Rome, they are spinning their wheels.

So again, in the middle of my long daily walk. I just got to vibrantly recalibrating in my heart the truth that there are so many of God's wonderful matters we simply can't know about -- and it's still okay. Right after I let that truth bathe my soul, I looked up and saw this supremely wonderful site in the sky.

One of God's wonderful matters He does share with us.

It is a magnificent acceptance. Magnificent, those wonderful matters.

And the beastliest temporal potentate can never take those things away.