I have a confession to make.

Too often I just can't see the forest through the trees. God blesses me tremendously to sit with me every morning and abundantly share His words with me, and then listen to my own heart when I praise Him and tell Him my concerns. I'm not sharing this to boast about my piety at all, sorry, again, this is just a confession -- that sometimes I catch something happening and just wonder why I didn't quite get that before.

Reading this article was an eye-opener with regards to how someone like George Gascon can be elected into a position that requires him to crack heads, yet prove himself to be someone who has expressly demonstrated that he'll do radical things as Los Angeles District Attorney that will not accomplish that goal. How did he get there?

It is indeed something I've already written about, but something I don't think anyone can get without a robust biblical perspective on the way things are. I almost didn't get it. One of the main features of that perspective is that there is a Kingdom, and there is a World. The key takeaway from Edward Ring's expose?

It isn't that Gascon will stop cracking heads. It is just that the heads he cracks will be meaningfully different now that a boldly progressive agenda is in place for legitimately authoritative World governance. In the name of "ensuring the most kindness all around" Gascon and the Technocrats will make sure people are the right kind of kind or else. As it is Google and Facebook and Twitter and whatever other dominant web platform there is are ensuring that if you should very unkindly assert that people's incomes should not be confiscated for the purpose of paying for someone to mutilate their bodies in the name of such courageous transitioning to their chosen gender identity, then, well...

The reason Gascon was propelled by the technocrats into that position, and pretty much why anyone like him is elevated as such -- look at what happened for Joe Biden -- is to firmly ensconce into the legal apparatus a severe measure of immunity for executing the law in such technocratric ways.

It is the way of Cain's city.

It is just being manifest in brave and bold new ways. 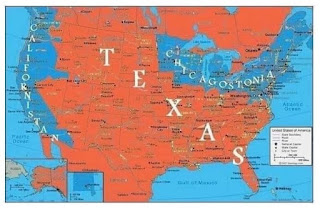 Some think secession is the answer for the millions who are shaking in fear from the metastasizing tyranny. Huh. One form of ruthless law enforcement replacing another. Huh.

Nah. Still just the World. In fact geographic secession is a relic of a long-gone past. The World secession movement is already forming on the web, splintering our country into its respective sects. Today social media of some kind is the way we communicate or not communicate. In 1860 a Rebel simply could not be in physical proximity with a Yankee. Split 'em up!

Now you may be next-door neighbors because you may simply satisfy your raging proclivities about the enemy online. Each online grouping has now become its own nation, and it will become more and more entrenched as communication technology becomes more and more sophisticated and the culture bloodshed more and more explosive. That's now where the war is taking place, and a clever technocratic army is required to manage it all. Indeed when China invades the US with the very worst of its cyberwarfare, just watch the fireworks then.

No, not even that will be anything. It'll be the most pronounced when Christ returns and, yes, secession will be when the sheep and the goats are split up, and the wheat and the tares will be divided. Ouch. That's when you'll see the real secession, Kingdom and World, those who names are in the book of life and those whose aren't.

Not my idea, not at all. Take a look-see at the 14th chapter of The Revelation. That last half of it there. That's secession.

Aware of all this I just accept. It doesn't mean I don't weep or I don't care deeply about these people. I accept that someday it is likely my temporal existence will end at the hands of those who believe me not to be kind enough. That's cool. I'm not challenging them or fighting them because they are God's instrument of judgment as much as He wants the System to be.

All I'm about is to be sharing His mercy with others, especially my executioners. I will be overjoyed to be singing hymns when that happens, yet again, this is not to show all how awesomely spiritual I am. Don't worry, I confess (yeah, more) I still get frightened about these things, very much for my children just looking at what this insane world has become.

But then, the Kingdom.

And that magnificent acceptance in and around the flames of Hell lapping up around us...

"...that neither life nor death, neither angels nor demons, neither the present nor the future, nor any powers, neither height nor depth, nor anything else in all creation, will be able to separate us from the love of God that is in Christ Jesus our Lord."