June 19, 2020
What a weekend for the System's provocations. One of the most important functions of Cain's legacy is to stir rebellion in its nation's inhabitants. And this weekend may likely be the most pronounced celebration of that significant activity.

Look at the kinds of demonstrations the Juneteenth promoters will have today. Legions of progressively minded folks with serious rebel streaks (the irony) hitting the streets furiously shouting and waving signs "Black Lives Matter," "Silence = Violence," and "I Can't Breathe," all vicious attacks against people who have nothing to do with anything they presume they're doing. Emotional and spiritual violence is just as wicked as the physical kind, and it so regrettably betrays the best meaning of the holiday.

Saturday is the first day of summer, and some places like Seattle and Santa Barbara in California have large elaborate parades to honor the day. While the coronavirus hysteria has forced the cancellation of some of the more public gatherings, the spirit still thrives in other related activities, some of which are online.

A couple years ago I happened to be in Santa Barbara on the weekend of the event, and while some of it reflects harmless but wildly imaginative entertainment, there is nothing to indicate it isn't fully reflective of a Bacchanalian celebration of pagan rites. Up and down State Street are bars and lounges filled with alcoholic indulgence, and while I confess I'm a temperance supporter it can't be denied that people in some kind of inebriation are more likely to rail against the man. The System does a poor job of addressing the core woundedness of people in such a state, and that is the way it likes it.

Sunday and extending through the month you'll see LGBTQ pride festivals and parades happening, and they are everywhere. A couple years ago in the middle of June I attended a professional conference in Salt Lake City, the land of Mormon high-level morality, and sure enough the Sunday I was there the downtown was smothered in LGBTQ stuff. At these events you'll see more signs of the rebellion: rainbows to let you know if you don't prominently affirm their particular "color" preference you're a bigot, "pride" to frequently shout for reminding themselves not to let the insecurity they have about their sexual immorality keep them from participating, the most flamboyantly dissolute outfits to try to prove to everyone how courageous and uninhibited they really are.

It is ironic that many of these events are being held on Father's Day. It is psychologically and sociologically proven that much of the reason people adopt such lifestyles is because of the dysfunctional relationships they have with their fathers. It is definitely the case that with fathers in such a condition or absent altogether, heavily abetted by the System's family eviscerating programs, the seeds of rebellion are certain to grow. 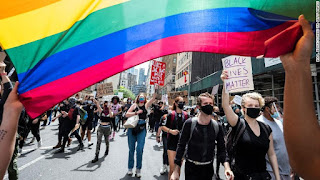 "Cain, you are the one running the city. You have the power. Make sure you are being my keeper. Make sure you provide the adequate public assistance to ensure I may live the lifestyle I want to have. Make sure you keep all those racist, homophobic, moralistic busy-bodies from telling me I can't."

This latter expectation was further expanded when this week the Supreme Court surprisingly ruled in favor of using the sex discrimination prohibition in federal civil rights law to allow people to "be" just about anything they want and still be ensured employment, admissions, and memberships in large organizations that would otherwise object to people doing brazenly shameful things.

The rebellion is about to get very interesting.

To get a better idea of this at work I'd urge you to check out Tupper Saussy's book Rulers of Evil. Definitely read the entire work, but if you must, thumb over to the chapter "American Grafitti" (Page 203 in the PDF). There you'll see the historical development of rebellion in the United States, including details about the pagan origins of the peculiarly Americanist brand.

Even more than that pull out your Bible and see Who It Is Who Really Loves. Just as good as that find someone who has Him in his or her heart and can share that Real Love with you. Yes they may mention how destructive is the Ministry of Sin, as well as how the Ministry of Condemnation does its quite legitimate work. I myself pray for all those people in those rebellions, that they'd look and see and have a desire to be a part of the Ministry of Reconciliation.