The Slavery Beyond Juneteenth

June 22, 2020
June 19th, or "Juneteenth," has come and gone, along with another splendid opportunity for devout leftist SJWs to bully anyone they think was, is, or will always be a part of the particular brand of slavery they revile. Recently Ryan Bomberger of the Radiance Foundation wrote an excellent piece about the slavery these people refuse to see, and it made me think.

It made me think about the rampant slavery out there going full bore today, and how much the sniveling obsession with the racist slavery of the antebellum period is severely constricting the ability to see what should be addressed. The claim what happened 150 years ago is a sort-of slavery still existing today in the form of white privilege and systemic racism is mostly a fantasy used to rationalize the worst socialist policy, one that is indeed rocketing forward at warp speed on the strength of institutionalized shaming on steroids.

Here are a few of the slaveries still around today, yet rarely get broadcast, much less confronted as they should. I should say some of these are mentioned and addressed, but are they adequately enough when drowned out by the roiling ferocity of the Frankfurt School zealots? 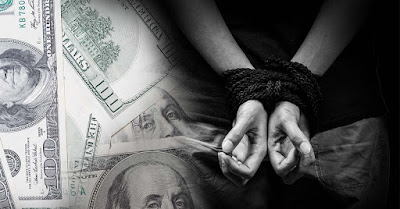 Slavery to criminals. This is the most obvious one, and the criminals we're talking about are very organized, very powerful, and very plugged-in. The most pronounced form of slavery in this instance is human trafficking, and young people are particularly vulnerable to be seduced or outright kidnapped into a world of slave labor and prostitution. Think eliminating the traditional nuclear family structure helps make this better? Think dismantling police agencies helps make this very real and extraordinarily destructive slavery better?

Slavery to addiction. This is really just slavery to expectations, and when the pain of failing to meet them becomes overwhelming, so many inevitably go to the ingestibles to ease that pain. Again, family is the key. There are all kinds of reasons people go to alcohol, inhalants, or drugs -- the opioid epidemic now the one that gets the most attention (if that's even enough) -- but the main one is how much they feel a mother and a father has abandoned them. Are one's parents there for them out of love, not codependency? One could add all the other kinds of addictions there are -- gambling, pornography, shopping... How many others keep the individual in a state of very real slavery.

Slavery to vanity. This is really the core element of anything that gets the slave to be under the control of money. How many forms does this take. Two of the most common are underpayment and debt. The employer may underpay his workers, which indeed is somewhat like the antebellum form of slavery, and certainly discrimination may be involved but it isn't always racist or sexist. When the employee then feels he must purchase things that go beyond his means, he may get into massive debt and be interminably subject to his creditor -- this is just as much slavery as anything. And these briefly mentioned items just touch the surface of the expansive, sophisticated exploitation that happens here.

Slavery to folly. When people adopt ideas that destroy others and even themselves, and they refuse to learn and grow away from those ideas, this is definitely a form of slavery. Quite sadly the individuals who are must susceptible to this are young adults. They've been subjected to the drumbeat of the worst folly in higher education, and they now carry those benighted ideas right into the bloodstream of their communities and on into the nation. The best example of this today is the stunningly prevalent virtue-signaling, the idea that anything positive I do for you is only because I need to look good to a whole bunch of people. Social media makes this particularly vile.

Slavery to the mob. Wow is this so evident here in the summer of 2020. Slavery to the folly often metastasizes into this slavery, where groupthink and communal bullying prevail. I caught a teacher writing online about how the "cancel culture" is just "glorified cyberbullying." Look at the statue razing -- I'm not big on statues one way or the other, except that I do know that in the past countries degenerating into totalitarian hellholes have always had this kind of thing happen. But right now? Fighting in the great crusade against the nasty hegemonic heteropatriarchy? It just feels so good. Thing is, they won't stop with statues, nor with the guy right in front of you...

Slavery to sin. This is the main one of all. This is the one that one must perceptively grasp if he wants to escape from what is really the worst slavery of all: eternal condemnation. The Bible clearly states that the law was brought not to show us how good we can be, but how rotten we really are. The only rescue is in the Person of Jesus Christ. Yes, great, I got you: I'm a racist -- but so is anyone who enjoys fomenting the current racialist witch hunt. You may certainly deny it and keep on keepin' on your futile crusade to try to prove to everyone you aren't a sinner, or you can humbly confess, go to Christ, dwell in His Kingdom, and know what real love is in order to really love others -- which, it seems anyway, what the devout leftist SJW wants anyway with his ranting and railing. He just has little idea of what that True Love really is, Who it is, and I believe all his screeching remonstrations to try to show everyone he does proves it.

Slavery to the System. I saved this for last because here is a truth that is one of the most profound there is: You are a slave to someone. No matter what, you are a slave. Yes it is a fine thing to try to address the kinds of slavery mentioned above in this blog post, kudos to you for having that commitment.

The question is, are you a slave to the Holy Spirit, as God tells us in the sixth chapter of Romans, or are you a slave to your sin? If it is the latter, if you are not covered in the righteousness provided by the Lord of the Kingdom, then you are going to be a slave to the World System. That means you are by default under the ruthless authority of Cain's legacy divinely appointed to crack skulls of those who want it to govern their affairs.

You may want to ingratiate yourself with the System by obsequiously doing the things you think it wants you to, that's cool, but you're still enslaved to its designs. The System uses the best arts of war to convince you that whatever it is you are doing outside Christ's Kingdom is going to bring you salvation. It may make you feel good, and it may even accomplish some very fine things out there in life. Really, the System is part of the fully legitimate Ministry of Condemnation, doing its thing as best as it can. Knock yourself out in its service.

Only Christ can do that.

The System is, again, supposed to be there doing its thing, especially incorporating the services of any and all comers, the more angry and rebellious they are the better. Whatever wholesomely righteous objectives you are pursuing will make you feel wholesome and righteous for some time, but you'll still only end up suffering the agony of enslavement. It's just a nifty comfy modernish, postmodernish, metamodernish kind.

And one more thing, how many other kinds of slaveries are there? Ones that may not even fall into these categories? Which ones do you know about? I mean, really, the best kind of slavery is one that keeps you in that state without you even knowing you're deep in it. Harrowing is the main quote from a promotional piece for an anti-human trafficking organization: "I didn't know I was being trafficked."