The Pandemic of Folly Will Never End

June 12, 2020
Every once in a while I hear some good news. I hear that there may be a chance someone will speak some sanity into decision-making regarding both the rancid racialist and coronavirus hysteria that continues to metastasize. One minute I hear or read something intelligent, thoughtful, wise, ahh there is hope -- then in the very next minute there is another example of the typical lethal absurdity that characterizes these times.

I simply cannot see anything happening that will end this madness any time soon. I must steel myself for the worst. I've even come to the stark realization that being a truth-teller could lose me my job as a teacher, and my job is to tell the truth. What irony.

See, this racialism socialism stuff has been percolating for so long that it does seem as if it is finally reaching a boiling point. As a teacher I've always shared with my students the extraordinary dangers of socialism -- that when everyone is mandated to have equal amounts of everything, incentive and initiative are destroyed and eventually nothing gets produced. This is the most basic economics.

Twenty years ago Venezuela started its revolutionary socialist experiment, one that was celebrated like crazy by leftists everywhere. Hugo Chavez was the most heroic figure on the planet. Finally a utopian paradise in which everyone is just treated so nicely by everyone else! 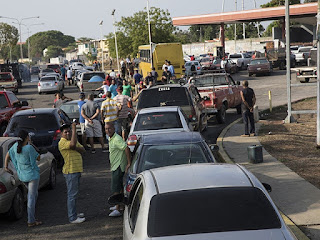 Today? It is like this in Venezuela. Good Lord. There is tons and tons and tons of petroleum underneath Venezuela, but it is such an economic and political hellhole that no one can get to it. They cannot even grow the crops they need. Right now they face the reality of people starving to death. Good thing there are other countries not socialist who may be able to help them, but just wait until the whole Black Lives Matter agenda gets implemented and there is wonderful splendid socialism everywhere in the name of the one solution to the black man's plight so there will be...

This was the story that broke my heart. These people want to dismantle all legitimate police forces and yet, this happens. I don't know the details of why it happened, but someone was shooting somebody they should not have been shooting. Really, think about it. Look at this. Does it really matter what the victim's skin color was or the perpetrator's skin color was or the law enforcement who should be on the job's skin color was or any of that? Please.

I do know this, that if what-we-do-know is true, that this gal was some kind of gospel-sharing person, then yeah, she indeed may have certainly been a follower of Christ. That should mean nothing also, except the reason I do emphasize that particular demographic item of hers is that she is someone who has The Solution. She is just one more shining light snuffed out. This is because the missionary is the most important occupation right now. Courageously and winsomely drawing people to Christ, welcoming people into the Kingdom, liberating people from the worst slavery of all: their own sinfulness -- so critical right now, because... I mean...

Especially because this desolation just isn't ending any time soon.

The fomented rage now is to put people in categories then dispense the System's justice based on those nebulous identifications. Yes, when it's all said and done there are two -- Jesus spoke of them. There are the sheep and the goats, the wheat and the tares, the wise maidens and the foolish maidens. Ultimately we're all one or the other.

What is so crazy is the Kingdom way has already been paid for.

Just a thought. Take some time with your Bible, find a place to sit comfortably, and get deep into the gospel of John. If you can't read it all take a quick look at the very first chapter. Just that. If you have a bit more time go to chapters 3, 6, 14, 19 and 20 if you can.

If you haven't done so, pray, repent and commit to actually, fully, bountifully following Christ. Be like one of those five maidens who prepared with enough lamp oil. See the World System for what it is, see it for how it is exploiting all these zealous racialists with stories of love and peace and justice when it is only filled with hate and fear and death, then run like crazy into the Kingdom where you may actually love another. And perhaps another, and then another.

Then hold on tight to those people.

Pray for those captivated by the System.

Look heavenward for the return of your beloved Savior.