Showing posts from October, 2008
Show all

October 29, 2008
In looking at the financial crisis upon us I can't stop reading about how the only thing we have to fear is fear itself. And then everyone dives right on into the horror anyway. "U-u-um, y-y-y-yeah, I'm not afraid-nn-nn-duhduhduh lions and tigers and bears oh my ." All kinds of neat solutions are spit out by World operatives and inhabitants alike, all prefaced by the standard "Here's what really needs to happen," and all falling into one of two categories: (a) a rehashed way to do oppressive World-directed law enforcement--not a bad thing for those who like being whacked by the law, or (b) some foolish idiocy spit out by someone seeking attention. I've written dozens of times that the only cure to the malady is Jesus Christ. It's not just me saying this. It's flat what it is. The problem is He not the wuss Jesus Christ most people think about, the guy who's just another one of the religious club gods people like to hang on the wall.
Post a Comment
Read more

The Reality of Value Enhancement

October 13, 2008
Today economics columnist Robert Samuelson wrote a piece called "The Engine of Mayhem." In some ways it was one of those typical "This is really what the problem is" pieces, yet Samuelson has a way of plainly elucidating what happens in markets. He brought up a novel term for the wild misassessment of value going on out there right now. It is appropriate to flesh this out especially on a day when the Dow got the biggest bounce in history, jumping over 900 points, an 11% increase. This exuberance doesn't mean everything's fine, it actually means everything is just as unstable. Samuelson's term was deleveraging , the practice of too quick a call for capital instead of debt. He concludes by pointing out that the financial system in place now is "inherently fragile" and what is needed is one with "firmer foundations." What this means most plainly is this. People are realizing that a whole lot of powerful financial people have lied abo
Post a Comment
Read more 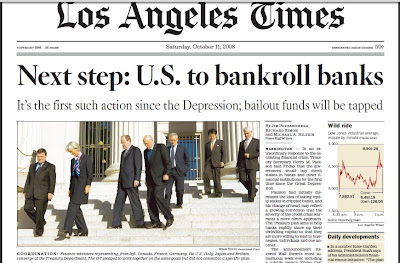 I enjoy plucking out the front page of the Los Angeles Times and putting it here on the web. I hope that the plain pretext will get people to see the folly of World affairs management. The photograph there was particularly striking. As the Dow hovered precariously at 8,000 on Friday (oh it seemed like yesterday it was stretching stratospherically past 14,000, didn't it?), all the most powerful of powerful finance ministers were meeting to hash out things. The U.S. guys had already decided they were going to use some of the "bailout" money to buy U.S. banks, so I don't know what's with the screaming headline. In fact, the U.S. pretty much "owns" every company anyway, whether it's a bank or not. Whenever a business becomes incorporated, it cedes control over itself to the incorporating entity. All the laws and by-laws of the governing authority are now preeminent, and any thought that you have some substantial management autonomy is because you are
Post a Comment
Read more

October 06, 2008
Today was the first weekday after the federal government finally authorized the dissemination of 700 billion pieces of green rectangular paper to its good-buddy exploiters, and the Dow responded with an appropriate clunk, dropping below 10,000 points for the first time in four years. At one point the drop was 800, a bigger plunge than last Monday's, but it rallied a bit late. Since its high of 14,000-and-change a few months ago, it has lost 30% of its value. But goodness gracious! I thought Caesar's magnificent decree that worthless people were worth $700 billion was supposed to get people fired up to not be worthless? What happened golly-gee-whiz-whillickers??? Isn't Henry Paulson up to the job of being United States Hedge Fund Manager, deftly pooling the nation's future productive capacity as leverage? When Congress passed this thing Friday, you heard a whole batch of Congresspersons say pretty-much what U.S. Senator from California Dianne Feinstein said about her
Post a Comment
Read more
More posts