Showing posts from January, 2012
Show all

Cowboys and Aliens - A Metaphor, Addendum

January 19, 2012
After writing this post a few days ago, I thought about a couple of things I wanted to add. One is a critical part of the movie I neglected to point out was profoundly allegorical, and the other a striking example of the way World inhabitants catatonically stare at that light. (Spoiler alert again, just so you know.) A week or so ago there appeared this piece in the Los Angeles Times by Meghan Daum titled "The Mythic Power of Zealots." She lights into Rick Santorum for having such "boneheaded" (her word) beliefs as protecting the lives of unborn children and the sanctity of marriage, and concludes (in so many words), "Zealots really don't have that much power after all -- well, we hope they don't but we'd better expose them like I am here before they do; it's a good thing us mainstream folk are vigilent enough to prevent it." Ms. Daum gazes intently into that light because she believes she is the one who is above it all by being main
Post a Comment
Read more

Cowboys and Aliens - A Metaphor 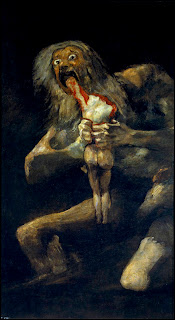 Recently I put into effect a Google feature that alerts me to items that interest me. I've put in a number of Catholicist Nation items like "Legacy of Cain," "ungrafted church," and "value extraction." Needless to say, these things never come up because no one knows anything about them. Oh they are very truthful and veritable aspects of life, of the critical contrast between the World and the Kingdom. But they aren't in the discourse because so much of the what's out there is of the World System, and bazillions of people who follow Cain right out of the presence of God and into the law enforcement clamps of Caesar don't have the faintest idea. There is a Google Alert item that does come up every once in a while, however. It is "human sacrifice." It's just that when it comes up, it comes up as that thing people do when they carry out some ritualistic murder of an individual, much like the Aztecs did when they hacked out the p
Post a Comment
Read more

Is That a Hand in Your Pocket or Are You Happy That You Can't Be Sure?

January 08, 2012
Last night driving home from an event we attended far from home, I was listening to a radio station that was playing some good alternative music -- some brand new and some I hadn't heard for a while. One of the latter was Alanis Morissette's "Hand In My Pocket." I'd heard it a million times back in the early 90's, and was enjoying its smooth, breezy feel when I heard this line: "What it all boils down to is that no one's really got it figured out just yet." Earlier in the song she confesses she herself hasn't got it figured out just yet, and again the entire tone of the song is to just live life as it is whatever it is. Okay. But this line just made me think about the rank abuse of logic that so many pass off as just-ever-so-with-it. Simply, how does Miss Morissette know for sure that no one has got it figured out? Has she met every single person in the universe to conclude there is indeed not a single sentient being who does have i
Post a Comment
Read more
More posts