Showing posts from May, 2011
Show all

Following Cain By The Millions 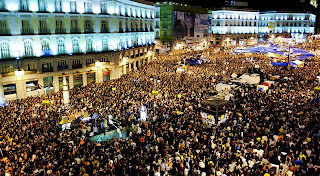 Found this photograph in the home page of a major news outlet. It is an image similar to others that profoundly illuminate the state of the Catholicist Nation, which appears to be very healthy. It seems a bazillion people in Spain have violated the rule about being up past midnight the day before an election. I imagine Spain wants things to be decided at the ballot box and not in the streets. It does seem that people are bit disappointed with the ways of proper enfranchisement, beings they're pounding the pavement so enthusiastically. Upset with high unemployment and certainly other abuses of all sorts, they've taken to let their exploiters have the what's-what. Stop exploiting us so much. Many in the throng even taped their mouths to "make the statement" that their marginalization is unacceptable. I guess they want their exploiters to notice them a bit more so they can... So they can do what ? A few days ago the Roman Catholic Church came clean about the
Post a Comment
Read more

Following Someone, Who It Is Says a Lot

May 16, 2011
Today in the news I happened to catch a couple of stories that highlight the pathetic nature of following someone other than Christ. Hundreds of millions do, you know. No matter how pathetically pathetic, they still do. There is the lead story everywhere about this French guy, the head of the International Monetary Fund no less -- oh, I hadn't heard of him before this -- Dominque Strauss-Kahn, who was caught with his pants down. Everyone was so startled that the euro dropped a bit. I thought, hmm, this guy must be a pretty major leader-guy -- you know, lots of people following him and his moral guidance -- for the entire currency to take a hit, however mild it will ultimately be. I also wondered, why all the shouting about his sexual exploits? People in power do this kind of thing all the time. Was he just that stupid to let himself get snagged in such a foolish way? Sorry, but this is just too stupid. Please don't misunderstand me. Any sexual assault is demonically repre
Post a Comment
Read more

May 13, 2011
I wish I could blog nonstop here. I wish many more people would read what I would be writing here if I could write more. I wish I wasn't so tired all the time from all my regular commitments, simply because there is so much I see out there that confirm the brutal realities that exist in a very oppressive World in such striking contrast to a vibrantly liberating Kingdom. I'd keep writing and writing and writing until perhaps at least someone would also see those confirmations. To be honest I wouldn't even be writing now but for the fact that one of the more elucidating of those really quite common revelations was made this week in a standard piece of financial punditry. I just have to remark about it, if only for a brief blog post. Check out Frank Partnoy's "The real insider tip from the Galleon verdict." He addresses the very common concern of all who are paying attention that insider trading just isn't really anything defined, much less something th
Post a Comment
Read more

The Essence of Value Disassessment

May 01, 2011
Just putting in a blog post to announce my latest home page piece . It is on a subject that I truly believe hits at the core of life's meaning and one's eternal destiny. You'd think that little is said about value and what it really is, but there is actually an amazing amount of information out there. It is just most of it is vomited up by a World System that can only do value disassessment in its duty to sustain rich, vibrant human sacrifice. Recently the widely celebrated and declared supergenius of economics, Joseph Stiglitz, joined with a number of other economists to officialy propose that Special Drawing Rights issued by the International Monetary Fund would suffice as a means of keeping the World's value assignments stable, you know, beings there've been a few financial crises recently. Just so you know if you don't already, SDR's are merely specially authorized value assignments as a way to measure assets and thus facilitate financial transacti
Post a Comment
Read more
More posts