Showing posts from July, 2014
Show all

July 26, 2014
Last week I came across a book called Cheap,  all about how the real crushing feature of a shitty economy is how cheap people are. If we'd all get on board with just paying for what a thing is worth then things would just be better. I don't disagree with much of the principled arguments made. After skimming through it a bit, I came across something very interesting on page 196. It was so significant that I'd scribbled a note about it, there, when I had the book in my hands, but I've come to find that I've misplaced that note. Instead of just jotting down again what I saw there, I thought I'd just blog about it. Why not. The number of things I see the World System doing in its duty to fulfill Cain's legacy is huge. And I frequently make little notes about them, stuff them in a folder, and a few do actually make it into my web work . Well, how about if I just share this little note with you right now. Right there on page 196 of Ellen Ruppel Shell's Che
Post a Comment
Read more 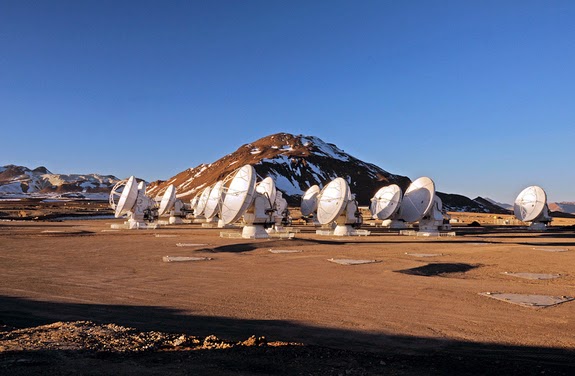 I was skimming through an amazing article about the ALMA telescope array high in the Andes, an intricately arranged set of radio telescopes designed to gaze at parts of the universe never before seen. I am wholly impressed by the work that goes into it, the ingenuity it takes to use it, and the discoveries derived from the information gathered by it. Now, that's the beauty of the ALMA program. Then there's the retarded part of science. That's  the part that says, "All of this space stuff just spilled out into existence by chance" as well as a hundred other inane scientific blappings that don't as much come from these fine scientists but from the people who've told them to believe those things. Oh, don't worry. Those things are perfectly rational. It is indeed perfectly rational for people who want to give the fullest vent to their sexual gratifications to concoct an entire world view that supposes God's not there and that we're just megag
Post a Comment
Read more

The Science of Governing Reprobation

July 10, 2014
I saw a film called Snowpiercers  last night. I'd seen some thing about it, then saw that the reviews were pretty good -- it was said to be a science fiction and political film, perfect, I love that stuff. While it was kind of goofy and very preposterous at times, it did a decent job of keeping my suspension of disbelief intact. It was also extraordinarily violent, but then, when you make a metaphor of the earth out of a train, there's bound to be some bloodshed. A lot of bloodshed. And in this instance, the bloodletting is in tight cramped quarters. Especially grisly. Anyway, just wanted to mention it was quite the bright elucidation of the World. To wit: - Human sacrifice is arranged and augmented by the System and for an ordained purpose, one that is indeed, quite spiritual in nature. - People are deliberately moved to live in benighted indigence to keep them in a simmering state of protracted rebellion, providing the necessary legitimacy to a System required to crac
Post a Comment
Read more

The Science of Righteousness

July 07, 2014
Only blogging now to introduce my latest home page piece . After seeing quite a lot of philosophical silliness in and around the spectacular effects elucidating perfectly fine scientific discoveries in the popular primetime series Cosmos , I wanted to add a few thoughts of my own. Yes, there is a science to righteousness. Surely many will holler about the evisceration of the romance and beauty of such a sublime thing, but the enthusiastic pursuit of what it actually is takes nothing away from that. Science is merely about "knowing," which is what the origin of the word means anyway. Do you know about this thing righteousness?  What would you need to do to find out more? And please, don't bother with all that "I'm not so dogmatic" crap. Are you dogmatic about your rejection of dogma? Come on. Lose the pretense. Knowing something is about embracing some truth. So, again, which "truth" are you embracing?
Post a Comment
Read more
More posts