Showing posts from February, 2018
Show all

The Great Racialist Browbeating Is Humming Along Just Fine 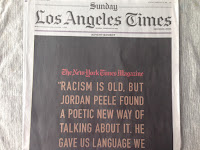 Yesterday I went out to the driveway to get my latest issue of Racialist Browbeating -- er -- excuse me -- The Los Angeles Times, which is really just a subdivision of The New York Times, which itself gets its marching orders from -- hmm -- do you know? Don't worry, I'll get to that. Anyway, this was what I was privileged to behold. It is an advertisement, for the film Get Out,  but it wrapped around the paper, covering up the actual front page news stories. Oh don't worry, those were just as racialistically oriented as the ad, but that the Times chose to feature this full four page movie ad to lead its Sunday issue says a lot. In fact, I addressed this very principle in my latest home page piece . The Times is merely a large powerful megaphone for the World Operatives sworn to inject the most robustly virulent humanist dogma into the minds of those who refuse to follow The Word instead. The message here is clear. It is not as much that Jordan Peele has found a poet
Post a Comment
Read more

February 13, 2018
I've been seeing this person "Omarosa" appear in the news a lot. Who is this? From what I gather she is someone who worked in the Donald Trump White House for some time, and her qualifications for this position were her appearances on Trump's reality show The Apprentice  in one or more of its manifestations. A basic Google search result tells us she is a "television actor." I've never seen her or heard her speak a word, but she seems to be getting a lot of attention. I have no idea why. I imagine it is because the mainstream news media consider her a prominent voice in the anti-Trump movement so they afford her gobs of airtime, even shoving cameras and microphones in her face to help her out: "Come on, give us more of the dirt on Trump and do it in your spectacularly endearing way!" Again, I really don't know much about her so I don't want to be presumptuous at all, but I did find out one other interesting thing. She is a minister
Post a Comment
Read more
More posts