Showing posts from December, 2008
Show all

The Subtleties of Human Sacrifice, Not So Subtle 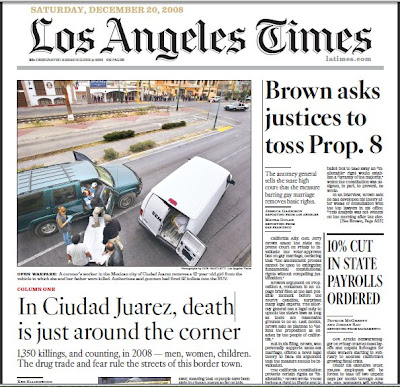 Here's the latest LA Times front page full of irony. Three major stories here, at least considered major by the Times judgment. The biggest is the one about the California attorney general, Jerry Brown, formally arguing the case that Proposition 8, an initiative that put into the state constitution the words "Marriage is only between a man and a woman"--is a violation of basic human rights. I wonder if he'd just as easily proclaim that prohibitions against rape or child molestation are a violation of basic human rights. Nah, I didn't think so. I guess I just wonder where he gets the idea that sodomy is okay. The answer is nowhere. The only place where it is acceptable and from which come all sorts of strident sophistry in favor of it is the minds of "progressives," and because there are enough of them, not a lot really, but enough, then it is pronounced a human right. Seems quite democratic, that's for sure--it must be good. Because so many of th
Post a Comment
Read more

The Industry Standard for Usury Deception

December 16, 2008
It's kind of interesting, the two big financial stories of the day, placed side-by-side on all the newspapers and newssites. The two stories: The assessment of the fallout from major investment player Bernard Madoff's elaborate Ponzi operation, and the Federal Reserve's slashing the federal funds rate to a quarter of a percent-- which is, for all intents and purposes, zero. For those who dare to look at these items through the eyes of Christ, they may actually see the insidious ways imaginative deception is used as the chief tool of World operatives sworn to sustain expansive levels of human sacrifice. It is funny to think how many people bought into Madoff's promise of 13% return on their investment--I'd even heard that those hit the hardest were residents of West Palm Beach in Florida, I mean, wasn't this the same bunch ridiculed for their inability to cast a ballot in 2000? Hey, gotta make sure my retirement is really secure . In its simplest terms, Madof
Post a Comment
Read more

December 13, 2008
Happened to come across a story in my morning LA Times about a charitable group formed from the Service Employees International Union. In two of the charity's four years it raised $165,000 to be used to help members get low-income housing. Well, as you can imagine, none of that money went to the recipients, all of it went for expenses and overhead. A couple of problems arise from this "travesty of justice." One is that every institutionalized charity must cover its operating expenses or you have no recipient benefits. Don't have a building and laborers to process things? The money can't get places to begin with. It is almost as if a charity must declare, "We must have x amount of money before we can actually make other monies available." This is just plain business reality. The second problem comes from an inherent condition of "charity." In looking all around I don't see much about this condition addressed. For context I came across an
Post a Comment
Read more

December 03, 2008
My family and I recently spent a week in Walt Disney World, and there is enough Catholicist Nation fodder there for a writing episode at another time. I will admit much of it is quite fun, and after we returned from a six-day binge we had to detox. I popped in a wonderful film, The Incredibles , something my children have seen a half-a-dozen times but I’d only seen once, back when it was in the theaters. As I watched it I was intrigued by its similarity to Watchmen , which I’d webzined on last month. I have to believe Brad Bird, the guy who put The Incredibles together, had to have been very familiar with Watchmen , because the Pixar film is a virtual children’s version of the classic graphic novel. At one point in The Incredibles the superheroes are outlawed because they are saving people who don’t want to be saved. What do you think about this idea? I ask my Government students this discussion question: “We all have a right not to be beat up for no reason. But what do you think i
Post a Comment
Read more
More posts