Showing posts from August, 2017
Show all

Who Is It You Listen To? Unless It Is God, It Will Be The Autocrat 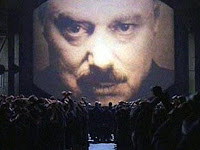 This article appeared about the inanity happening at Google regarding a bunch of clueless Gen-X'er and Millennial genius computer people trying to get the concept of righteousness. Unless they look at it by God's Word, they'll be lost. Take a peek at what they are blithering in the posts and tweets and rants they've been bilging about. It isn't that they don't know there is truth, it is that they think truth is what the Jesuit-managed System tells them it is. In fact there are grains of truth in those things in that Breitbart piece, but they can only respond with "Well that's just how I feel don't hurt me." Really, look -- you see it all over the page. These are fearful, even paranoid people scared to death that they'll be found out so they can't help but proclaim "I'm the right kind of social justice warrior! Listen to MY genius thoughts about it all!" You could even see that they're so into the System's ve
Post a Comment
Read more
More posts