Showing posts from May, 2012
Show all

In The Family Way

May 18, 2012
Kenny says he can make flying boots. They'll be great. You just strap them on, and up you go, zipping off to wherever you need to be. No traffic, no delays, no hassles. Just perfectly safe, perfectly efficient, solar-powered flying boots. A bunch of his brothers and sisters and cousins like his idea, and they join a bunch of their friends -- even ones who live far, far away -- to give him a bazillion dollars to make the boots. The contracts are all drawn up, they wink and smile at one another about all the ways they're really working within the true intent of the law, and they all go clubbing together to toast how wonderful this will all be. Dad is suspicious, however, but Dad likes Kenny too much to say anything. In fact he works hard to turn those suspicions into his advantage. Should Kenny and everyone fail to do so well in this effort, he gets them to believe that he'll rescue them. That way no one will abandon Dad and his splendid intentions. The neighbors really
Post a Comment
Read more

What is Jamie Dimon Still Doing on the New York Fed Board? 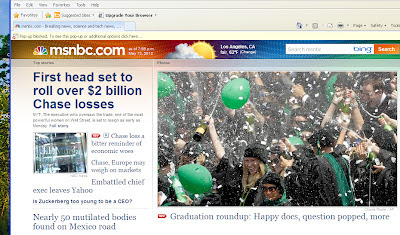 This is the question I've heard a dozen times already. After being on the hook for a $2 billion trading loss, Dimon is taking the heat and many are getting nervous about his place in the highest reaches of the Ivory Tower. What so many -- and by "so many" I mean just about everyone who likes having a bit of a return on their money, so that number is literally in the hundreds of millions World inhabitants around the globe -- what so many don't get is that They've put him there, and have asked him to do precisely what he did . Societe Generale bank president Daniel Bouton was in a very similar situation a number of years ago, when one of his traders did an "Oops" with a huge gob of other people's money -- whether phantom or real -- and he did all the mea culpa ad nausea silliness too. I wrote about it in this home page piece in my webzine , but I have a feeling not many read it. Everyone is still doing it, sad. Everyone is still thinking they&
Post a Comment
Read more

May 01, 2012
This past week two people were notably convicted of crimes that it merited a bit of news coverage. Charles Taylor, the erstwhile dictator of Liberia, was put away in an international court for his autocratic brutality. Legal scholars and political scientists alike have expressed some consternation about this, merely because it may only encourage dictators to do more to consolidate power in order to keep them from the clutches of international law. Another gentleman whose name is much less important received a "third-strike" sentence for the crime of conning people out of their homes. He promised help with foreclosure and deceptively took the houses and cashed in the equity. I don't know the details, but it was pointed out that no fraud conviction has ever resulted in the mandatory 25 year term the three strikes law requires. Many expressed distress about this. One could easily scratch their heads about all this, but when seen from The Catholicist Nation perspective
Post a Comment
Read more
More posts