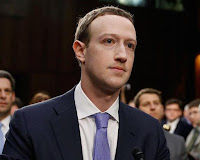 The biggest news of the week was how much the value of Facebook tanked in the swirl of conditions afflicting the powerful social media company. It dropped 20% in one day wiping out hundreds of millions of dollars of value assignments given it by those obsessed with finding connections with people through a computer interface.

Thinking through this roller coaster phenomena related to what some call "The Masters of the Universe," I've come to the conclusion that any widely used social media platform is in a no-win situation particularly if it emanates from the World System.

And Facebook does. There is no shred of evidence that the people who run Facebook or any of these other platforms have any idea who Christ is, who The Only One Who Delivers From Evil is. No wonder Google had as its motto for years "Don't do evil." They don't know what that really means and they must keep browbeating themselves with some benighted humanist conception of how to achieve that. They've since dropped it, probably because they realized that just spouting that phrase gets people to wonder, hmm, is there some evil there you must more thoroughly address?

Here's the dilemma. First, Facebook is a private company and as such it can have any rules regulation requirements procedures protocols it wants to have. If it wants to ban posts related to lime green polka dotted rhinoceros culottes, it can. It is its own company with its own boundaries as they want them to be. If you don't like that, then go to another social media platform! Go make one of your own!

The trick is that it is a bit of a chore to do that. After working through an Internet-of-Things lifetime to assemble a good solid friends list, now you'll have to go through and do it all over again somewhere else. Many organizations have some measure of success with a thriving Facebook presence. Add to this the uncertainty that any such media platform will be as prolific as Facebook.

On the other hand, what happens if Facebook does nothing to limit whatever people do with their posts? Straight away you'll have people posting the most vile things, and Facebook indeed has a posting policy because of that very thing. The problem is once Facebook writes a single thing about something considered unacceptable, then they are establishing their own conception of what is and isn't acceptable, even if wholly justified.

Back to the freedom thing, shouldn't then that be okay for them to do that? Facebook decides. On the other hand who cares if some people put up horrifically objectionable things, just don't join those groups! Why can't we use Facebook for our community and let them have theirs? Then the user decides.

The problem is that Facebook requires an extraordinarily huge user base for it to be meaningful. The neighborhood BBQ block party only counts if you have all 100 people showing up, but that means mean ugly loud smelly Bob from down the street should be able to come too. He shows up then no one wants to show up.

And since Facebook has sort of adopted this role of public social media platform because of its size, it does take its cue from the World System Operatives authorized to make it feel as such. And then it starts to censure material it finds politically objectionable, most notably anything with which ideological conservatives are serious and articulate and influential.

This then is why Facebook does its data trolling -- the very thing people cringe about the most with these enterprises. Facebook is just trying to protect its reputation. While trying to keep objectively wretched things out it is muting political discourse -- and I understand! Some political statements are indeed horrendously evil, such as anything people say endorsing institutionalized theft (socialism), adultery (sodomism), and false witness and coveting (racialism).

The Facebook people haven't a clue about the evils of those things because they don't know Christ from Whom the wisdom to discern comes. All they have is the endorsement of those things -- they go to the mat defending socialism, sodomism, and racialism because those three things are the key components of their virtue signaling crusade. Their commercial headaches come from the fact that many Facebook users are seeing that, seeing what they're trying to do, seeing them lie about it, and ultimately you'll get what you got this week:

But I pity them because they are in that bind. Either be totally open and free and let anybody post anything but risk having the most grotesque filth show up, or be closed off on some things but risk ticking off people who disagree with you being shut out because you simply cannot tell what's really right and wrong.

I will tell you I'm starting to read a book I picked up at the library for this weekend away in the mountains. I'm just starting but it looks fascinating. It is called Swerve, and it is about how Lucretius' polemic of Epicureanism pretty much led to full-on modern conception of humanism. Already I have an idea of how that all came to be -- the Roman Catholic Jesus was simply too overbearing and burdensome and the Renaissance provided an out: Man being really really really good on his own woo-hoo! And look what we found! This epic poem by some Roman dude who says all the things we need to know about worshipping nature!

I know I'm oversimplifying Lucretius, but his work isn't much more than a splendidly lyrical but egregiously silly blab about how we're all just glued-together particles and someday you'll be nothingness so get over it already. I still want to discover how this got so woven into the mainstream, I might pick up some insights about the process. I already know who's responsible, I just want to find out more about how Christ is being so summarily dismissed in favor of Hell's prospectus.

Looking at Mark Zuckerberg flailing about trying to gird that philosophy, pusillanimously squealing to the world that is is worth the billions he says it is -- it is very sad.
__
authenticity Catholic culture war economics evolution finance folly humanism mythology social media socialism understanding World System