About as good a description of Cain's legacy of the most ferociously proficient law enforcement is at Robert Morse' blog Straight Line Logic. Everything about it is so dead-on solid, except for the very last two paragraphs.

Oh he's got the freedom part right, but wrong Freedom. Every one of these tomes end with "Ya just gotta get up and claim your American freedoms again dammit!" I do think Gore does get it, and he may very well personally know Who that Real Freedom actually is. That's fine. 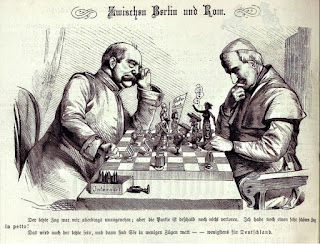 Don't misunderstand however. The Necessary Corruptocracy must operate as it must because the nation's populace asks it to do so. It doesn't matter what happens Tuesday, Trump or Biden (or really, Harris) the culture war will rage even more explosively. With so much reprobation woven into the fabric of Americanist life it will not abate. This may not necessarily be bad because God will use it to accomplish His purposes in some way.

For you see, the Freedom is very powerfully elucidated in the 110th Psalm. Its first verse is the most referenced Old Testament passage in the entire New Testament. It is clear, Jesus is Lord. He is Lord of everything, even over the levers of the Devil's government people want to try to jiggle a bit on Tuesday. And as Lord He will come down like a ton of bricks upon every nation on the planet that has been unrighteous in the name of Cain's legacy. Please. Look for yourself. It is ruthless.

Look carefully at what is happening that should crush the soul of anyone who has any slight hunger or thirst for righteousness. Look at what presidential candidate Biden said about 8-year-olds -- that if they feel like "transitioning" they should be able to do so. Words straight from Hell couldn't be more hideous. And yet, this is just part-&-parcel of the main feature of the destruction of the United States. The Republicans couldn't be more complicit for their part in either doing nothing about it or even neglecting to say anything against it.

Take a look at this piece by Hezekiah Kantor. It elucidates everything about the nature of our complete dissipation. The counterfeit family is all about calcifying the idea we may do whatever godless thing we can in the name of sexual, or even better, expressive freedom. Everyone is expected to celebrate these expressions, or very soon they will be facing furious penalties for being so "unkind."

I went to a church service Sunday for the first time in months with hundreds of people who had no masks and sat shoulder to shoulder. The worship was phenomenally joyous, for a good portion of the service we sang praises to God with robust intensity and adoration.

I will tell you that it was Jack Hibbs' church, Calvary Chapel in Chino Hills, and he is renowned for preaching Republican politics from the pulpit. He evens brags about his challenge to all the "Johnson Amendment" prohibitions, but while he gets brazenly political he is really no threat to Caesar, and Caesar knows it. The Jesuits are going to get their way no matter what Jack Hibbs screeches and his congregants absorb.

I will say this, however, to Hibbs credit. He did get three key things right. He did share three spot-on truths in his message on Sunday that should indeed be very well-taken.

1. The elements of true righteousness are real. Hibbs emphasized that righteousness is something in particular. He lifted up the truth about the value of unborn lives, the value of one's genuine labor reflected in their incomes, the value of Israel in God's eyes as still relevant in seeing through His purposes, the value of sexual integrity and the transcendent family construct, and several other items that are being severely eroded by humanist culture.

I understand many will claim today's Israel is just as much a part of the World System as anything and is not the same as God's Old Testament beloved. Maybe, the point here is that there are a number of biblically sound principles we cannot neglect to elevate in our lives and relationships. We should love the people of Israel as much as we love anyone God puts in our paths in the way He asks us to, and I do believe much of that is seeking insightful understanding of what God is doing with any nation.

Again, that 110th Psalm. There will be the most just accountability for everyone on the planet.

2. You can't change the World by voting in a civil election. Even though Hibbs went crazy about the voting thing and doing it for the Republican cause, it was encouraging for him to emphasize that none of that can replace the simple gospel message. He indeed lifted that up high above any temporal political activity. Being a 501c3 non-profit does bely that message, but at least he made it quite emphatically. It is interesting he also boldly admitted that as much as the United States continues to distend that critical mass of people behaving as they are, our beloved country will be toast. We will be judged just as harshly and terminally as any nation.

3. The best political activity is service for the Kingdom. He also insisted each of us go into the World and use our God-given gift, whatever it is, to have an impact on someone's life simply because you love that person with the self-sacrificial love of Christ. That's the most important thing, that people know who Jesus is, they find their salvation in Him, and they know it because people authentically show Him to them.

He is the freedom. He is the freedom that Robert Gore speaks about at the end of his amazing piece on the nature of World System governance, and He is the freedom the rabid atheist leftist seeks when he or she thinks they are being free by saying they can now do some insanely abominable sexual thing no one's ever considered before.

And still so many believe Tuesday's election results will be their savior.

So yeah, it is time to step up our game.

The fields are ripe for harvest...

The image is from the 1875 satirical German publication Kladderadatsch and I found it in a search on "culture war." The caption reads "Pope: The last move was certainly very unpleasant for me; but that doesn't mean the game is lost! I have one more very fine move up my sleeve! Bismarck: It will also be the last -- and then you are mated in a few moves -- at least for Germany."