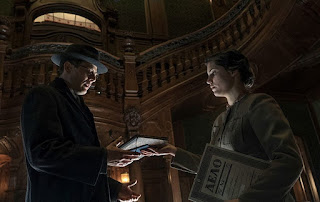 There is so much to consider regarding what happened this past week. One thing is for sure. January 6 was the date half of Americans were officially designated persona non grata. The Stalinist program of marginalization ostracism humiliation cancellation remonstration demonization prosecution conviction termination elimination is now moving forward at breakneck speed.

When a constitutional attorney commentator on a cable news program was asked why the Democrat Congress is seeking to take down President Trump with a mere 12 days left in his term -- by either the 25th amendment or impeachment -- he responded with an amazing answer.

"They want to make Trump radioactive."

All week the news media have been going crazy portraying Trump supporters as domestic terrorists participating in an insurrection or attempting a coup. Go watch. Just listen. Read it anywhere a New York Times subdivision has a huge forum for its System propaganda. You even remotely support anything that Donald Trump was considered to have favored?

It is categorical: You too are radioactive.

Should you be someone who has a passion to see that parents of an unborn child are committed to seeing that baby be born and yes, not aborted, then you too are radioactive. If you want to rein in a little the socialist public policy initiatives that are continuing to maraud through the US obliterating initiative, industry, and wealth creation, well, you're radioactive and should be [any or all of those things in that first paragraph there]. If you firmly, truthfully, and even graciously reject the identity politics racialist browbeating that indicts you simply for being a particular skin color, you are extraordinarily radioactive and subject to the now widely accepted penalties.

There are any number of other items that could be cited here. I have to be careful. I'm actually putting this post on Blogger which is operated by Google. Google recently went after alternate social media platform Parler when people started abandoning the Pravda-like Twitter because it was too loose with the free speech. Parler didn't have enough protocols in place to keep conservative -- er, excuse me -- insurrectionist thought from seeping into the minds of dangerous people.

Thing is, I don't have many readers here in Google's platform. What if I had a million? Would my blogger account be brought down, simply for sharing truthful things? I have never once shared a single word about challenging Cain's domain, in fact, I actively encourage people not to remonstrate against him and his legitimate duties to administer the sin management program of the people who ask him to do that. I have to accept, however, that no matter what I write in the most articulate and gracious way, it will always be misinterpreted by people with a calcified World-imbued plausibility structure, that's just reality.

As I've shared before, I believe these words about the contrast between the System and the Kingdom are to the World devotee hideous-sounding swear words in a foreign language. For the nasty "swear words," I may be banned, but that's okay. I'm good with dying for my Lord, so that's nothing. All I care about is right now introducing Him to as many people who'd read or listen. I'd love to have ten million followers, but God will do what He will with the words I share about Him. It's all good.

But I still do feel it. I still do fear for what will happen with the United States. Many pastors and prophecy dabblers seriously consider that the reason the US is not in Scripture is this country will be toast even before the last days described in The Revelation. This past week's events and what will certainly happen under a Biden-soon-Harris presidency give that prediction a bit more weight.

A few nights ago we watched the film Mr. Jones. It is on one of your streaming sites, I'd check it out. It is truly a horror movie, and while there are no slashing monsters or anything like that, it is a horror movie for sure. It is the story of Gareth Jones who in the early 1930s perceptively, and quite naively I might add, wondered what was going over there in the Soviet Union when things simply did not add up.

I'm not going to get into the details of the plot, but I will say that if you don't believe the New York Times employs the most murderous deceit to perpetuate a narrative that ingratiates them with the powers-that-be, just watch this film. You can even look at the history, you'll see it right there.

The main point of the film is the graphic depiction of the consequence of progressive policies in the hands of true believer mandarins. Yes, it is certain, the political results of the week and the power of the academia-media-emporia to further hypnotize the populace will eventuate in another Holodomor. The progressive movement's agenda implementation has already reached critical mass as much as red white & blue-blooded conservative-minded Americans think they can push back against it. 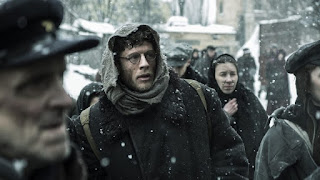 What happens when the threat of [those things in that first paragraph above] become so overbearing that the number of heroic truth purveyors needed to push against it is simply not enough? Try to object to agricultural collectivization in 1932 Ukraine? Do you need to know what happened? Should you drop what you're doing right now and see Mr. Jones so you can see it and prepare for it?

Are you still convinced something like that could not happen here?

Were you paying attention to what the academia-media-emporia nexus did to many of you this week?

It is a phenomenally frightening time right now, which is why I can't neglect to share yet again in closing the most enthusiastic exhortation I can. Some may think it has to do with being a better prepper -- get food stockpiles and secure weapons and build a nice bunker -- it is okay to make sure you have some of those things. But even without any of that make sure you have something else. Someone else.

Make sure you have Christ.

Make sure make sure make sure. Make sure you know you are in His eternal grip because things are going to get very ugly. Even if things seem to be fine, you will still witness things that should only be in horror movies, really. And they may very well happen to you.

The only -- the only assurance of security is Christ. Dwelling in His Kingdom. Taking stock that when you witness the System doing its thing in all its gruesome glory, you can be assured you have a place with Him in His courts forever.

The wonderful thing about that is you will understand and know His love, and you can love others with a self-sacrificial love that transcends anything you can experience. It will be that love, that love you give and that love you receive from others in Christ, that will sustain you whatever happens.

It is joy, it will be joy, when you are the Kingdom to those who will certainly be more and more lost in the World.