The Book of Eli and the Kingdom Cancel Culture 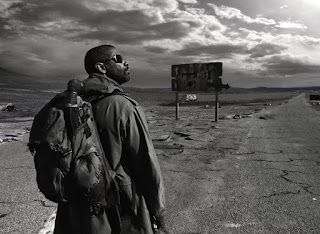 There are two motion pictures that have half-hour long conclusions that I have seen dozens of times. I don't watch or even remember much of the regular bulk of those films because they are far too crushingly depressing, but that is some of why those particular segments are so transcendently transformative.

The films are The Shawshank Redemption and The Book of Eli. Not going to get into Shawshank right now, and if you know the film and know the substance of that last half-hour or so, you know. You may be like me with tears flowing from my soul as Red settles into his seat for that bus ride to the border.

Same thing with The Book of Eli. When that brand new makeshift printing press on Alcatraz Island is printing up those pages, my soul just streams those tears.

But again, it isn't just the divinely powerful redemptive quality of the story, it is the contrast to the pure evil. In and around the completion of Eli's mission there at the end, we see Carnegie consummating his desperate attempt to see what is in the book, and we all witness the gangrene of his soul as gruesome as that in his horribly wounded leg. It is a perfect allegory for the ninth chapter of John's gospel, there at the very end of that compelling story: "The blind will see and those who see will become blind."

I consider it near impossible for someone to come to Christ and experience the joy and beauty and glory and everything else wondrous about the Kingdom, about Him, unless he or she gets a good grasp of the World. Many don't have a problem with that, they've lived such benighted lives that they can understand how magnificent it is to turn to Him out of that.

I won't say this is a stalwart truth by any means -- I admit I don't know all of the ways Christ draws people to Him. We can get some idea from Scripture about several of those ways, that's sure, but I do believe there is biblical support for the idea that you can't truly see Him for who He is until you see the things He gave His life for, including our own distended propensity for the most heinous evil.

I'm sharing this because I had a thought as I watched so many rail against the machinations and effects of today's cancel culture. We see so many scream bloody murder about, most recently, the "cancelling" of Dr. Seuss books that have depictions of certain individuals in their own particular cultural attire and such. "That's racist!" is the claim, and I confess I too think it's a stretch.

But then I thought...

Aren't we too being a form of "cancel culture"? You know, when we want to cancel the purveyors of the cancel culture!

At this point it must be asked, what is the basis for the cancel culture demands of each side of the culture war?

The right will say something about freedom of expressions and so forth... but aren't there some things they are perfectly happy with Caesar shutting down, like pornography for instance? I mean personally I'm very okay with that, no matter how much it gets in the way of someone's "freedom of speech" -- even though, let's face it, Caesar doesn't do the best job of cancelling that crap.

The left is on this binge of trying to erase anything that's racist, and they've devised all these tests for what is actually racist to try to boast about how anti-racist they are. Much of it is preposterous if not downright criminal -- we know the worst of their cancel culture is influencing hundreds of large commercial enterprises to fire anyone who violates the newest rules. Much of this is justifiably wrong, but then...

Isn't remonstrating against that a form of cancelling? Aren't the anti-anti-racists just as much about cancelling the anti-racists?

Which gets us back to The Book of Eli, and as much as we all proclaim that we are never about violence in any way, let's face, most of us can viscerally connect with this dude, Eli, played exquisitely by Denzel Washington, just having his way with everyone and anyone who gets in his way -- who gets in the way of his mission. He karate-chops and kick-boxes and socks and shanks and slices and shoots and blasts and even uses a bowstring to fire arrows at the worst of his detractors -- ::kah-thwapp:: Lots of blood splashed and spilt in the boldest sepia tones.

To keep those who'd hinder him at bay.

What about followers of Christ? Yes, we have a cancel culture too, and those who are too smarmy and slinky to admit it are not worthy of the Kingdom, sorry. But too many Christians are unafraid to call out what should really be cancelled. I could put that list down right now, right here in this blog post, it'd be good, but let's just say much of it would involve the presently most imaginative ways to violate the Ten Commandments.

A terrific example (I just can't help it) is the anti-racist stuff. It has got to be seriously cancelled, really, not because racism is okay in any way, but that is sorely violates the Ninth Commandment against bearing false witness. I always want to ask the rabid anti-racist, "Okay, so who exactly are the ones not anti-racist enough for you?"

"Well, white people, with their white privilege and white dominance [and all the rest of it]..."

"So you know that every single white person is guilty of not being anti-racist enough just because of their skin color?"

They will surely try to wiggle out of their logical predicament and, yes, violation of the Ninth Commandment in making a false witness claim against someone, in fact a lot of someones they do not know, but that doesn't mean this kind of evil cannot be called what it is.

Here's the thing, should the follower of Christ then whip out his or her shanking instrument and start swinging it at the grave offender? No, and there are a number of reasons we don't do that.

One, we know we have been just as guilty of what the rabid anti-racist is guilty of, and sought and received mercy and forgiveness for it from our Lord. We would love for our detractor to see Christ for who He really is, turn to Him, and find the freedom from the intense insecurities that are driving the anti-racist to be so vicious. It isn't anti-racism bullying that frees the racist and racialist alike, it is Christ.

Two, when Christ returns He will deal with all the evil we are witnessing in bright brilliant colors right now. It'll happen, it just won't happen right now. That's all on Him, we don't have to worry about that. This doesn't mean that we can't see the evil for what it is and speak meaningfully and truthfully about it. In fact Christ already died specifically to cancel the things we know are evil all around -- sin, death, fear, despair, loneliness, etc. etc. -- Calvary was one big cancellation event.

Three, what will happen right now is for the follower of Christ simply to minister His grace and mercy and gentleness and charity to the cancel culture social justice warrior by listening to his or her heart, finding out what animates them, and sharing the Kingdom with them no matter what happens.

Are you like Eli at the end of the film where he represents the follower of Christ as living out His very word to a dying world? We could read the book, and it is very good that we do regularly read the book, but if we aren't living the book we're no good no matter how much culture cancelling we want to do.

What is so awesome is we can be like Eli, yes, blindness and all. That's the point of what Jesus said at the end of that ninth chapter in John, be blind. Tell yourself the truth about your blindness, but like Eli, sense the evil for what it is, courageously stand up to it, and fight it with the Gospel out of the love you have for those whom God has placed in your life.

Then you can truly see.