The Story of Annie 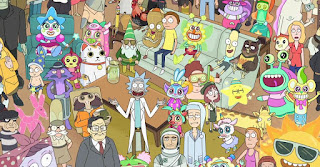 The very first Rick and Morty episode I saw was one that I'd seen had received some notoriety as one of the best of all the episodes so far. It was called "Total Rickall," and its acclaim is indeed well-deserved.

Rick comes into the dining room and is met at the table by his family who are sharing fond memories with Uncle Steve. After a moment Rick takes out a blaster weapon of some kind and blows away Uncle Steve. Everyone is horrified. Turns out "Uncle Steve" is really just an alien capable of not only making itself look like someone familiar but implanting memories in your brain about that someone in order for you to believe you've been delightfully acquainted with them for quite some time.

Through the episode we see many of these creatures appear in the home of Rick's family and carry on as devoted family members and friends, but because of the implanted memories it is hopelessly impossible to distinguish who is who. It is an outstanding premise and exceptional episode in the series.

And let's be honest, ideas from Hell destroy souls.

Of course in the Rick and Morty episode they figure out what they need to do to stop the creatures. I'm not going to spoil it for you, please watch it when you can. But the parallel to real life is the only protection against the demonic for us, for anyone, is willingly entering into a deep abiding relationship with Christ and having such a desire to make that relationship vibrant that you will prayerfully read His words in Scripture and talk about them with others in any number of different endeavors: cell group conversations, ministry interactions, worship assembly participations, service activities, family care fulfillments -- it can actually be anything that demonstrates love for God and for neighbor.

It is simple, and please forgive the categorical nature of this statement, but if you aren't doing that, you are so given over to the creatures. You have no hope. What makes it so vicious is that they feel so good -- that's kind of how it is so easy to give into them. I truly think every single such individual knows somewhere deep in their soul how much of a nightmare existence that is.

I'd like to suggest something else to do, along this vein.

Check out Donald Boudreaux's The Story of Vicky over at the American Institute for Economic Research. The AIER has been an oasis in a desert of gruesomely ugly mindf--k creatures. Its people are among the very few courageous and articulate truth-tellers in the midst of the Covid insanity that bazillions of people still wallow in. Any talk of vaccines by anybody means they're beholden to the creatures. Any talk of wearing masks or being unnecessarily distanced means they're believing the lies. Even when they speak about them in terms of "These will finally get us back to normal!" or "Hey you don't have to do them but they are recommended" they are haplessly under the hypnosis.

I'm not even saying they don't have to live succumbed to any of that if they really just want to do so. If they want to smother themselves with disinfectant ooze, take 57 injections of varying types of mRNA material, and lock themselves in a hermetically sealed chamber in the basement, go for it. Have at it. Enjoy yourself.

But damn. There is Vicky.

And after reading Vicky's story, I realized that Vicky is just someone else, actually.

What a coincidence that on the television premium movie station shortly after the appearance of The Story of Vicky, the film Misery was shown. I watched a bit of it. This is one of the very best, and most frightening horror movies ever made. I know many movie fans would concur. It doesn't even have any supernatural elements in it -- well, except for the fact that the monster in the film, Annie Wilkes, is possessed.

She's possessed with those ideas that lead her to murder.

Vicky's obsession to soak up the compelling World System ideas have, in a very profound way, led her to commit murder. It isn't that she is not a sympathetic character -- those with relentlessly painful PTSD should be extended the greatest amount of care and understanding. But this is largely the point. It is kind of a revelatory thought for those who aren't quite fully into the Scripture thing yet, but it is true: The brilliant World Ops doing the legit work of Cain's Legacy must commit acts of human sacrifice as part of their occupational duties. Oh I've seen many ways they do it directly, but the most effective way to do it is through the actions of the hypnotized masses...

Through the Vickys they've made scared to death, and in turn, make so many other people die.

That is what has happened with these lockdowns. The mandates are about doing this thing or that thing -- masking, distancing, Plexiglass dividing, etc etc etc -- they have all really done diddly squat when compared to the horrific emotional, spiritual, and yes often physical violence done in the name of carrying on the Narrative, elevating the Grand Mythology, idolizing the Great Goddess Equity.

And the number of souls on a rocket ship straight to Hell because they simply aren't being introduced to Christ's soul-saving deliverance in that bountiful truth and beautiful grace and boundless joy...

But hey, at least they aren't dying from Covid...

The reason I'm blogging about this is to introduce my latest home page piece, which gets a bit into the Ecclesiocracy and the origins of a lot of the creatures. Here is also the first of a series of blog posts I made back in April about the Covid hysteria creature. The truths I discovered back then are no different from the truths about it all today. And please, forgive me, none of this about my truth at all. Here is the most important place to look even if you don't pay attention to a thing I write.

The image from Rick and Morty is pretty ubiquitous on the web. This one was from the Screen Rant website.