Seeds From the Evil One, Still Sprouting

September 24, 2015
I live in California where we are told if we water our lawns we're evil. Never mind that residential use makes up a piddle (puddle?) amount of the water used in the state. Sure we need most of that water for agricultural purposes -- we all eat. But I'm also great with reasonable conservation activity.

On the corner of my street a homeowner with a perfectly beautiful front lawn decided to drink the Kool-Aid, however, and tear up that lawn and install other more "drought-friendly" landscaping. Why? Even with incentive rebates (which are not a whole lot, let's face it, and I'm pretty sure that money dried up a while ago) I just can't see why so many people are buying into the overblown anti-drought message.

People still live in the deepest guilt with the most crushing shame.

I'm fascinated with Jesus' parable about the seed-sower. There in the 13th chapter of Matthew. Seeds from "the evil one" are sown among the good seed, and it all grows. What to do? He says leave it until the last day, when the harvesters will take care of business.

Here's the thing. Today the Pope spoke to Congress in the Capitol Building. Did you just get that?

The Pope of the Roman Catholic Church was given the dais in the House of Representatives.

Do you know how apoplectic Americans would be if that happened even 20 years ago?

No, right now those weeds are growing really tall. 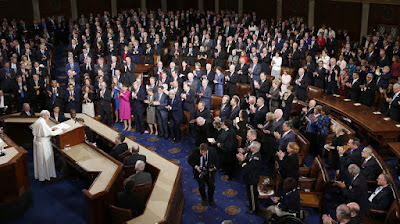 "A day of celebration for the Society of Jesus. The extirpation of American Protestantism is seeing its fullest manifestation here. I do not consider this a wholly bad thing, as Protestantism has been slowly carved up for decades, the Jesuits relentless as ever. But all within God's plans. The Pope's speech was all about law enforcement, and as Scripture clearly states, 'The law is made... for the lawbreakers and rebels, the ungodly and sinful,' and the Pope is legitimately assigned the job of administering that charge. The Capitol Building is indeed his domain. I look for the Holy Spirit now to move mightily among those who see it for what it is, want out, and desire the deepest, richest liberation in Christ."

Just watching all those representing all three branches of the U.S. government, who really represent all the people of this nation, just beaming and applauding there.

With an anti-Christ feeding and watering his garden...

This screen shot, however, is the one that is most telling. From the NBC web news site, with the pictures juxtaposed as is. I titled it what it is precisely: Insane Irony. 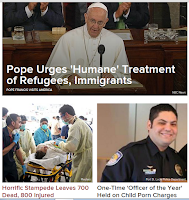 So many people haven't a clue that this guy is in charge of the operation that governs the things that led to the murder that happened in Mecca, and the sexual abuse that happened in small town America.

But as I said in that post, all of the body-of-death stuff that emanates from people's wicked heart and the pontiff's obsessive desire to manage it all must reach some kind of heightened measure before people start to really see it for what it is and turn from it in genuine repentance and be healed and saved.

I believe that does indeed involve worship assemblies and church communities gathering together to become truly ungrafted -- to stop being subdivisions of this august organization that was, yes, put into motion millennia ago by God Himself to do exactly what the Pope is doing and saying he's doing and have praises heaped upon him by the reprobate for doing.

It does what it does.

God does what He does, rescue people from it all by virtue of the shed blood of Jesus.