An Important Truth Rule That Is Almost Always Completely Misunderstood

A few blog posts ago I admitted that a lot of what I do is splash a bunch of words on the computer screen so I know what I want to say. I wondered about admitting that because it may make it seem I don't know what's in my heart. Yeah, sometimes I don't, but sometimes I really do and the words just come out the way they do which may not be exactly the way I want to them to. Umm. Thing is everyone does this. No big deal. Sometimes we write pretty well, other times it is a bit meandering. We do our best.

I'm writing yet again because I cannot neglect to post a link to this piece by one Kevin Smith over at Off-Guardian. It is obvious he is working it to get down key truthful things but it is just sort of a rich genuine flow mostly related to his considerations of the shared observations from an individual of some stature. Kinda cool actually, the truths he elucidates, but he's just riffin'.

Doesn't mean what he's saying is any less valuable. 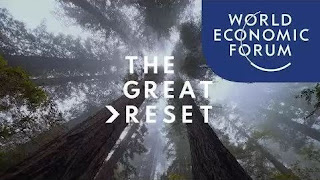 Thing is, in all the revelatory things he is saying here -- that The Great Reset is real, that it is a supremely destructive force, that there are legitimate authoritative forces making it happen, and yes, that there is a very profound spiritual dynamic involved -- he is still not getting at the Truth Rule that I consider is definitely one of the most misunderstood ones.

And when I say Rome, yes, I do mean a critical component of it is the Roman Catholic Church.

Part of the extraordinarily misunderstood part about this is people look at this and think, "Hey! You're anti-Catholic! What a bigot! What prejudice! What judgmentalism! You're against God!"

Yes, I've seen a ton of the history of anti-Catholic rage and remonstrations and all the rest of it. Yes, very hard to watch, very difficult to accept, very troubling to think about why and all the rest of it. I'm not going to go there now, there is so much to all of that -- much of which many haven't any real idea as to why things happened then the way they did.

Sure enough readers may rage against this assessment. That's okay, misunderstood people sharing stark realities have been blistered through the ages by those programmed to misunderstand. I will add this, however, and yes, this is just anecdotal. Just sharing it here to see if it resonates, that's all.

Many of the very nice, wonderful people who confess some allegiance to the Roman Catholic Church in some measure are the most miserable people I encounter. Far too many of them. I firmly believe they are miserable because they are overwhelmed with the shame and guilt of flailing about trying so hard to do good for God, church, country, facemask Karens -- and they fail so often at their aspirations of perfection that it is far too often just plain unbearable. But then this is the ministry of condemnation at work -- it is not hard to see the normal symptoms of its regular activity.

This is why I share these things in my webzine and my blog. For one I so want to minister Christ's freedom and grace and mercy and liberation from that enslavement, specifically to the Roman Catholic -- and just as much to the Catholicist, that individual who may not even have any avowed connection with Rome but is sucked into its influences just the same through the massive amount of World System exploitation there is.

For two I am not doing this to challenge or protest or do anything against the legitimate activity God gave Rome to do. If you carefully read the fourth chapter of Genesis, you'll see the establishment of the World System and it started with the first human sacrifice -- the perpetual cornerstone of the System's spiritual component.

Rome is there doing its thing as it should be, doing it legitimately and proficiently and authoritatively to mitigate the effects of the evildoing by those who refuse to avail themselves of the righteousness that is in Christ.

Read Mr. Smith's piece. You see it all over that thing.

All The Great Reset gymnastics have all been in place for eons, they really have. It is true that the current progression of that activity may indeed have accelerated a bit too much, but what of it? If Rome's ordained operatives can make people crazy enough to seek solutions outside The Kingdom, then they are doing their job! Thing is, God has a profound way of taking the evil that is metastasizing all around us, much of it generated by Rome itself, and turning it against itself for the benefit of Kingdom dwellers who have a passion for reaching the miserable.

I am convinced the horrific Covid hysteria and lockdown stuff, all of the disheartening identity politics-equity-racialist stuff, and all the warp speed Great Reset push that follows will somehow, someway, be one of the most impressively rousing footstools of God ever.

One of the things that caught my attention in Mr. Smith's piece was his mention of 3,000 people doing the Reset work for the billions on the planet. How amazing is that, that a mere 3,000 are really doing all the deciding for everyone else. I know he's speaking of industrialists and politicians and hifalutin technocrats and all of those kinds of people, but I find it fascinating that this number 3,000 is the same as the approximate number of sworn Jesuits working in the United States.

That's still not a whole lot of people doing a massive amount of influencing.

Huh. Don't think those 3,000 "influencers" don't have a confessor of choice? The Jesuits are experts at making people feel really good about the substance of their psyche, no matter what condition it is in.

If you haven't already, I urge you to read Tupper Saussy's Rulers of Evil. There you will see a comprehensive expose of Rome's work through the past couple of centuries. It is quite sobering.

The only reason I'm introducing it to you at all is so you won't misunderstand, and then summarily you'll be His.

He is where the joy is.

The image was taken from Bill Muehlenberg's blog Culture Watch, which I'm sure he clipped from a WEF video. Thank you.