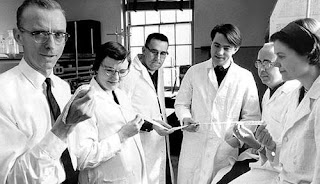 I have to pound out a quick post just give you a heads-up on another article, this one from a gentleman over at The Libertarian Institute courtesy of ZeroHedge (the image is from that page as well, thank you to them) that boldly and articulately lays out the ironclad case that, yes, indeed,

Everything. There is nothing that isn't. Scientists today in the sworn service of Caesar -- quite authoritative, legitimate, and necessary -- are really just priests performing the liturgically mandated sacrificial duties of Cain's Legacy. They are so good! They are -- no one is saying they aren't! They do very good sciency kinds of things.

But it is still religion, and it still involves human sacrifice.

You can read all about how God set the whole thing in motion back there at the time of the fourth chapter of Genesis. He did it deliberately because He knew there would simply be some who would refuse to worship Him in Spirit and in Truth. So Cain was given the task of building a city away from God's presence to manage the sinful behavior of the World's inhabitants with a strength that was seven times that of any comer.

That legacy has carried itself all the way to today, where the Ministry of Condemnation does its best work through the mouths of the official megaphone-holding doctorate-wielding heralds.

I was reading another piece, this one by Kit Knightly who does fine things over at Off-Guardian, and it was about how we are slowly being turned into a nation of renters, just as the Davos people envisioned -- you know: "You will own nothing and you will be happy." More rabidly advanced information technology and the insanely metastasized prison-block housing just makes it much easier to command the attention of the masses -- it is what Cain is charged with doing, I mean I get it... why make it harder than it should be?

The thing is Knightly makes a common error that you likely hear all the time. Whenever someone brings up the latest Covid lockdown or Critical Race Theory or imaginative redistribution of wealth proposal or any of the absurd but profoundly rationalized policy inanity, they almost always say something like this.

It is all about power.

It is all about control.

It is all about greed.

Full-stop. Perhaps even a smug little mic-drop action there.

To stop there is to give up, cop out on getting at what it really is, because even these good people at Off-Guardian and at ZeroHedge and anywhere else where they do a terrific job of elucidating key truths and then --

Just stop, and they don't really add anything.

I know why they stop. Because they too are shivering Catholicists so given over to what the System thinks about them that they dare not say what it really is for fear of being accosted by the thought police. They only know the Catholicist Jesus, and if people knew they had any connection to him, well then,

Religion, quite frankly, is a very good thing. For the World devotee it is very good in that you can worship any number of Jesuses you want for the explicit purpose of keeping your habitual evildoing in check. Every single member of that church, no matter what religion, cult, sect, group, polity -- no matter how pious or profane, theistic or atheistic -- doesn't matter, every single one has an object of worship. It isn't Jesus but it may look like Him! That's good for now. God made it that way back when the events in that fourth chapter of Genesis occurred.

The Kingdom dweller's religion is to love God and love neighbor. What? Doesn't the World devotee do that too? Maybe! But that doesn't change the clear, actual, true distinction between worship of a World god and The God.

The point related to the subject of this post is that Cain's minions are not doing their thing for power, control, or greed -- sure, those things are in the mix.

They are doing it because they are working their asses off to please their lord.

In a very real sense it is about a zealous and even institutionalized form of virtue-signaling. "Hey my lord, look at me! Look at how wholesome and righteous I am being a very good person here doing this very progressive thing to make the world better!" Thing is, who exactly is the individual that splendidly pious person is trying to please? Who is that lord? Is it a World lord? Even one who looks really really a lot like Jesus? Or is it Jesus Christ Himself?

It is funny, Knightly mentions how much we are moving into a brand new kind of feudalism, and the feudalism of the Middle Ages was just about a bunch of people within a fiefdom led by some lord in some castle somewhere. The new techno-feudalism is forming in exactly the same way. Everyone gravitating to their little fiefdoms and yes, the lords of those fiefdums do have religions.

But when it comes down to it, there are only two.

The Kingdom and the World.

Which one is your fiefdom going to be in?

Again, I slipped away with the photograph from the ZeroHedge website, and thank you again.